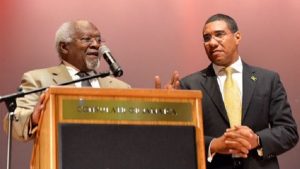 The Jamaica government is rallying behind an effort to get the United States to clear the name of National Hero Marcus Garvey who was convicted of mail fraud in the US in 1923.

Prime Minister Andrew Holness and Minister of Culture, Gender, Entertainment and Sport, Olivia Grange are encouraging Jamaicans in the Diaspora to sign an online petition calling for Garvey’s exoneration.

The petition seeks to have US President Barack Obama pardon Garvey on the basis of “wrongful conviction”. It requires 100,000 signatures by September 28 in order to get a response from the White House. But as of early Monday morning, only 6,259 people had signed the petition.

Garvey, a proponent of the Black Nationalism and Pan-Africanism movements, founded the Universal Negro Improvement Association (UNIA) in Jamaica in 1914 and then moved two years later to New York where the organization thrived. He spoke across the US and urged African-Americans to be proud of their race and return to Africa, their ancestral homeland.

To facilitate that return to Africa, Garvey founded the Black Star Line in 1919, to provide transportation to Africa, and the Negro Factories Corporation to encourage black economic independence. Three years later, he was arrested for mail fraud in connection with the sale of stock in the Black Star Line, which had by then failed.

Grange said in a statement that the Jamaica government is of the view that “the trial and conviction were meant to tarnish Garvey’s image and diminish his global movement.”

“The United States officials disapproved of Garvey’s fearless advocacy of self reliance, black pride and unity among his people so they imprisoned him, then deported him,” she charged.

Grange noted that the Government of Jamaica has attempted, at the highest level, and on several occasions to clear Garvey: “A resolution was brought to the US House Subcommittee on Criminal Justice, from as far back as 1987. But sadly, the mission is not yet accomplished.”

Prime Minister Holness, addressing a town hall meeting at the Jamaica Performing Arts Centre in Jamaica, Queens, New York, said the exoneration of Garvey “is very important for our country and our National Hero.”

He contended that Garvey stood up for the “depressed and downtrodden” and, in the process, made his mark globally.

“The time has come when he should be exonerated…and that time is now,” Holness declared. The

Prime Minister was joined on the platform by the National Hero’s son, Dr. Julius Garvey, who told the audience that it was appropriate that his father be pardoned as he did not commit a crime.

Dr. Garvey expressed the hope that the petition would be successful in achieving its goal.

In the meantime, Minister Grange will be taking a motion to Parliament to expunge Garvey’s local criminal record. He was convicted in Jamaica for sedition and imprisoned at the St Catherine Adult Correctional Centre for three months.

After Garvey’s US imprisonment, he was deported to Jamaica. In 1935, he moved to London where he died on June 10, 1940. In 1964, his body was returned to Jamaica where he was declared the country’s first national hero.