Home / Sports / Thunder take a step back as offense stalls

Thunder take a step back as offense stalls 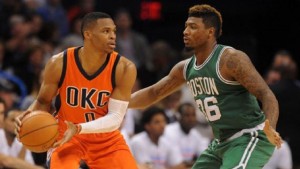 Russell Westbrook, who was 5-of-20 from the field, had a tough time dealing with the Celtics’ Marcus Smart, whether he’ll admit or not.

OKLAHOMA CITY — Russell Westbrook wrapped up his postgame media availability, 1 minute and 52 seconds of the usual tension and awkwardness, and took a step through the crowd to toss his Gatorade bottle away. From about four feet away, Westbrook lobbed the bottle, and it hit a cabinet a solid foot above the trash can.

It was that kind of night for him. And the Oklahoma City Thunder.

Westbrook finished with 27 points in the Thunder’s 100-85 loss to the Boston Celtics, but shot a miserable 5-of-20 and totaled his lowest assist number of the season with just five. The Thunder scored 33 points in the second half on 10-of-39 shooting, but the guilty party in that stat was the fourth quarter: 11 points on 2-of-17 shooting. The two makes: an Enes Kanter hook shot with 9:22 left and a Dion Waiters midrange jumper with 5:54 left. That’s it. That’s all.

The halfhearted explanation from Westbrook? “Just missed some shots,” he said. I guess in literal terms, that is a true thing, but in the subjective sense, it was a much deeper thing.

The necessary they-don’t-have-Kevin-Durant-right-now disclaimer applies, but the Thunder’s second-half offense crumbled under increased defensive intensity by the Celtics as they isolated pick-and-rolls and forced the Thunder into quick decisions. Those decisions routinely resulted in a badly judged shot, often coming from the hands of Westbrook, and the previously improving ball movement and spacing the team has displayed were nowhere to be found.

“There’s times we’re getting the ball to really good areas on the floor and we’ve got to recognize and identify the next pass to the next pass sometimes,” coach Billy Donovan said. “I think that’s part of them growing and learning with what we’re trying to do on offense. I feel like it’s my job to continue to help them. I’ve seen a lot of growth and strides in them.

“But we’ve got to continue to evolve in that because so much of good offense is played from one side to the middle of the floor to the other side,” he said. “There’s times we do it really, really well. And there’s some times we don’t do it so well, so that’s an area we have to get better at.”

It’s always easy to point the finger at Westbrook, who is the obvious target that can sort of metaphorically embody the Thunder’s offensive struggles at times. Too straightforward, too isolated, too predictable. When the offensive engine fails, there’s a ripcord to pull and that’s No. 0 trying to make something out of nothing. It’s a bit of a chicken-or-egg scenario, but when the Thunder’s offense cooks, Westbrook almost always is leading that. But on Sunday, as the Celtics generated clean, consistent offense throughout the game, the Thunder’s slip was abrupt, and ugly.

That’s 10 games for the new Thunder under Donovan, and while there are six wins that included some very positive stuff, there also are four losses that have featured some frustrating transgressions. There’s always an expectation of instant results when there’s a regime change, but with the continuity within the Thunder, their evolution is going to have to be gradual and methodical. And don’t let the last thing you saw tell you everything — the Thunder entered Sunday’s game second overall in offensive efficiency, behind only the nonsensical Warriors.

“I think one of the things I’ve got to really try and help these guys with and through film and obviously having to play again [Monday], is them having an awareness of different guys that are open,” Donovan said. “That’s something that hopefully as we try and build and get better at those things that they’ll see more often.”

Westbrook, who entered Sunday’s game as the league leader in assists, had only his third game without double digits. And he had eight in each of those other two games. Part of Sunday’s depressed total was an inconsistency in anyone paying off a pass from him, but most of it was because Westbrook’s playmaking took a backseat for whatever reason in favor of an aggressive scoring mindset. Westbrook attempted 10 3s against the Celtics, taking five in the first quarter, four coming early in the shot clock. Maybe he got caught up in a one-on-one physical tussle with Marcus Smart, or maybe that was just part of the game plan without Durant.

Asked about Smart’s physicality matching up with him, and if the Oklahoma State product did anything special against him, Westbrook naturally took exception.

“He had a good game, but we have another game tomorrow,” Westbrook said. “We’ll see ’em again.”