Three tropical waves noted between Africa and the Lesser Antilles 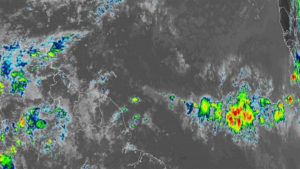 In their 6.25 am tropical update, the National Hurricane Center noted that there are three tropical waves in the Atlantic between Africa and the Lesser Antilles.

The center stated that a new tropical wave was added to the 0600 UTC analysis/surface map along 15W from 11N southward.

The wave is moving westward and it shows up well as a low amplitude moisture surge . Convection is noted at the base of this wave, and also near 08N15W.

A second tropical wave NHC noted is along 28W from 11N southward. Scattered moderate to isolated strong convection is noted where the wave meets the ITCZ, particularly from 04N to 06N between 27W and 29W.

The third tropical wave is much closer to the islands along 46W from 12N southward. Convection is limited near the wave axis.

The wave is collocated with a 700 MB trough, from the global computer models. Recent scatterometer data indicate moderate to fresh NE to E winds ahead of the wave axis, and N of 07N.

No threat to any land mass at this time.