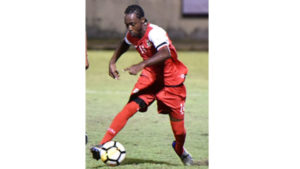 Police sources have confirmed that three persons were taken into custody for questioning in the shooting death of national footballer Kennedy Isles on Friday night (Jan 24).

According to police, “investigations so far have revealed that 28-year-old Isles of Taylor’s Village, who resided at Sandown Road, was outside his home when he was approached by an armed assailant who opened fire at him. He was wounded several times about the body and succumbed to his injuries at the scene”. The shooting occurred just after 9pm.

Information gathered indicates three young men were taken into police custody on Friday, and one has subsequently been discharged. The suspects are said to be from the Newtown area. No charges have so far been laid.

Police say the investigation into the federation’s first homicide for 2020 continues.