This Caribbean Woman Has Been Named Among The Most Powerful Globally 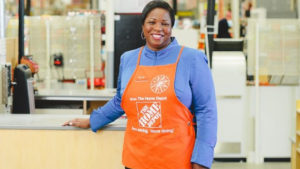 A 53-year-old Caribbean woman has again made the 2018 Fortune Magazine List of Most Powerful Women.

Jamaican-born Ann-Marie Campbell, was named at 16 on the list of 51, which includes Oprah Winfrey at 51st. She is also one of only two black women to make the list, the other being Winfrey. It is the second time Campbell has made the list, debuting in 2014 at 18th.

Campbell is currently the Executive Vice President, U.S. Stores at Home Depot. She started at Home Depot as a part-time cashier in North Miami Beach to help pay for college.

One day in 1989, vice president Lynn Martin came to the branch for a “store walk” with the employees, and when he asked a question, Campbell volunteered the answer.

Impressed by her assertiveness, Martin became her mentor, encouraging her to pursue promotions in other store operations such as merchandising, sales and marketing.

In the latter position, she was in charge of 690 stores and 100,000 employees in 15 states, Puerto Rico, and St. Thomas. In January 2016, she was promoted to executive vice president of U.S. stores, with responsibility for 2,000 stores and most of the company’s nearly 400,000 employees and about 90 percent of the company’s $101 billion in revenue, which is up nearly 7 percent over the previous year..

In addition to giving stores a face-lift, Campbell is also adding lockers for self-service and online sales, since 47 percent of Home Depot’s online orders are picked up at physical locations.

Campbell was born in Kingston, Jamaica and attended Holy Childhood High School. After graduating high school in 1981, she and her mother and brothers immigrated to the United States, settling in Miami. She earned an M.B.A. at the J. Mack Robinson College of Business at Georgia State University (GSU) in 2005, after completing a bachelor’s degree in philosophy.

“I have always felt that knowledge is power. The ability to have a discussion based on facts and knowledge about a subject, really elevated myself in the line of fire sometimes. I always wanted to know what I was talking about and I invested the time to understand the subject matter and the people around the table,” Campbell was quoted by the Jamaica Gleaner as saying. “I am certainly a believer in living your passion. I have found my passion. I absolutely enjoy retail. I love the retail business. I love being able to be a part of connecting customers and associates and figuring out how we grow the business and all that. It’s still my passion today.”