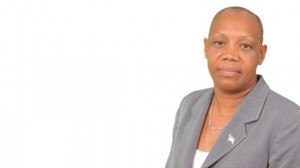 Raheem Phipps and Zakariyah Moore, formerly of the Irish Town Primary School, now both students of the Basseterre High School, received scholarship awards in the category of students who have been successful academically, of good behaviour and are in need.

As the Minister and Parliamentary Representative is also a sports enthusiast, awards were also given to the victor and victrix ludorum of the Irish Town Primary School, Deshawn Reid and Matika Pemberton and Wanyaira Woolard and Elvin Defraites from the Beach Allen Primary School received the awards for Best Sportswoman and Best Sportsman in Central Basseterre.

The Parliamentary Representative encouraged the students of both schools not to be satisfied with less than excellence in all their endeavours. The brief but impressive handing over ceremonies took place at the respective schools in front of the Principals, teachers and support staffs, students and parents in the case of the Irish Town Primary.

The Parliamentary Representative thanked both principals, the teachers and parents for the critical part they play in the development of our children and encouraged them to be not weary in well-doing.