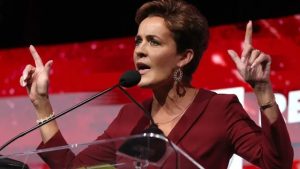 Republicans spent much of Election Day planting seeds of suspicion about the integrity of the nation’s election systems. As the results began to trickle in, GOP candidates made it clear that they plan to harvest their crop, especially in races that remain undecided or where the margins were narrow.

Arizona gubernatorial candidate Kari Lake, whose race against Democrat Katie Hobbs remained too close to call as of early Wednesday morning, took to the stage in Scottsdale, Arizona, to suggest the election may not have been on the level. “Two minutes into voting, we had people being told, ‘Well, you’re going to have to put your little ballot over here into another box,” she said, referencing technical issues at Maricopa County voting places earlier on Tuesday.

Lake added that “the fake media over there tried to tell us we were wrong for asking questions about our elections.”

Elsewhere in the country, Doug Mastriano, the Pennsylvania gubernatorial candidate who spent his campaign pushing 2020 election fraud conspiracies, still hasn’t conceded his race despite it being called by the Associated Press and trailing Democrat Josh Shapiro by double digits.

Mastriano was heavily involved in efforts to create a fake slate of electoral college electors in Pennsylvania in an effort to overturn the election results, and has indicated that as governor he would use his power to appoint Pennsylvania’s secretary of state — who oversees elections — in Republicans favor.

By contrast, Democrat Tim Ryan gracefully conceded his loss for a seat in the Senate to Republican J.D. Vance late on Tuesday.

“The way this country operates is that when you lose an election you concede,” he said. “You respect the will of the people. We can’t have a system where if you win it’s a legitimate election and if you lose someone stole it.”