Home / Regional / These Caribbean Countries Have The Most Gun Deaths Per 100,000 People

These Caribbean Countries Have The Most Gun Deaths Per 100,000 People 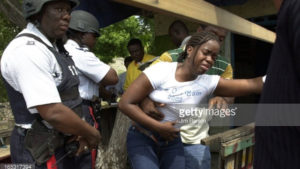 Three Caribbean countries now make up the top ten list of nations with the most gun deaths per 100,000 people, from firearms globally while four others rank in the top 20.

That’s according to data compiled by the University of Washington’s Institute for Health Metrics and Evaluation for the study, entitled “Global Mortality From Firearms, 1990-2016.”

For the Caribbean, the U.S. Virgin Islands leads the region followed by Jamaica and Puerto Rico.

Globally, the study showed that guns are responsible for about 250,000 deaths worldwide every year. Singapore had the lowest, with 0.1 death per 100,000.

“This study confirms what many have been claiming for years – that gun violence is one of the greatest public health crises of our time,” Mohsen Naghavi, a professor in global health at the University of Washington and the study’s first author, said in an accompanying statement. “There are no simple antidotes to address this health problem. The tragedy of each firearm-related death will continue until reasonable and reasoned leaders come together to address the issue.”