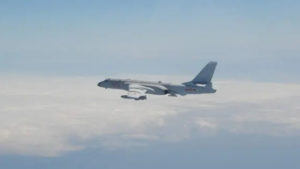 Since last Friday, the People’s Republic of China has launched a total of 155 warplanes – the most ever over four consecutive days – into Taiwan’s Air Defense Identification Zone; Ned Price said the state department was “very concerned”. There have been more than 500 such flights through nine months this year, as opposed to 300 all of last year.

Before war comes to the Indo-Pacific and Washington faces pressure to fight a potentially existential war, American policymakers must face the cold, hard reality that fighting China over Taiwan risks an almost-certain military defeat – and gambles we won’t stumble into a nuclear war.

Bluntly put, America should refuse to be drawn into a no-win war with Beijing. It needs to be said up front: there would be no palatable choice for Washington if China finally makes good on its decades-long threat to take Taiwan by force. Either choose a bad, bitter-tasting outcome or a self-destructive one in which our existence is put at risk.

The prevailing mood in Washington among officials and opinion leaders is to fight if China attempts to conquer Taiwan by force. In a speech at the Center for Strategic Studies last Friday, the deputy secretary of defense, Kathleen Hicks, said that if Beijing invades Taiwan, “we have a significant amount of capability forward in the region to tamp down any such potential”.

Either Hicks is unaware of how little wartime capacity we actually have forward deployed in the Indo-Pacific or she’s unaware of how significant China’s capacity is off its shores, but whichever the case, we are in no way guaranteed to “tamp down” a Chinese invasion of Taiwan.

Earlier this year, Senator Rick Scott and Representative Guy Reschenthaler introduced the Taiwan Invasion Prevention Act which, Representative Reschenthaler said, would authorize “the president to use military force to defend Taiwan against a direct attack”. In the event of an actual attack, there would be enormous pressure to fast-track such a bill to authorize Biden to act. We must resist this temptation.

As I have previously detailed, there is no rational scenario in which the United States could end up in a better, more secure place after a war with China. The best that could be hoped for would be a pyrrhic victory in which we are saddled with becoming the permanent defense force for Taiwan (costing us hundreds of billions a year and the equally permanent requirement to be ready for the inevitable Chinese counter-attack).

The most likely outcome would be a conventional defeat of our forces in which China ultimately succeeds, despite our intervention – at the cost of large numbers of our jets being shot down, ships being sunk, and thousands of our service personnel killed. But the worst case is a conventional war spirals out of control and escalates into a nuclear exchange.

That leaves as the best option something most Americans find unsatisfying: refuse to engage in direct combat against China on behalf of Taiwan. Doing so will allow the United States to emerge on the other side of a China/Taiwan war with our global military and economic power intact.

It would take Beijing decades to overcome the losses incurred from a war to take Taiwan, even if Beijing triumphs
That’s not to suggest we stand passively aside and let China run over Taiwan with impunity. The most effective course of action for Washington would be to condemn China in the strongest possible terms, lead a global movement that will enact crippling sanctions against Beijing, and make them an international pariah. China’s pain wouldn’t be limited to economics, however.

It would take Beijing decades to overcome the losses incurred from a war to take Taiwan, even if Beijing triumphs. The United States and our western allies, on the other hand, would remain at full military power, dominate the international business markets, and have the moral high ground to keep China hemmed in like nothing that presently exists. Xi would be seen as an unquestioned aggressor, even by other Asian regimes, and the fallout against China could knock them back decades. Our security would be vastly improved from what it is today – and incalculably higher than if we foolishly tried to fight a war with China.

Publicly, Washington should continue to embrace strategic ambiguity but privately convey to Taiwanese leaders that we will not fight a war with China. That would greatly incentivize Taipei to make whatever political moves and engage in any negotiation necessary to ensure the perpetuation of the status quo. The blunt, hard reality is that a Taiwan maintaining the status quo is far better than a smoldering wreck of an island conquered by Beijing.

The only way the US could have our security harmed would be to allow ourselves to be drawn into a war we’re likely to lose over an issue peripheral to US security. In the event China takes Taiwan by force, Washington should stay out of the fray and lead a global effort to ostracize China, helping ensure our security will be strengthened for a generation to come.

Daniel L Davis is a senior fellow for defense priorities and a former lieutenant colonel in the US army who deployed into combat zones four times. He is the author of The Eleventh Hour in 2020 America
… we have a small favour to ask. Millions are turning to the Guardian for open, independent, quality news every day, and readers in 180 countries around the world now support us financially.

We believe everyone deserves access to information that’s grounded in science and truth, and analysis rooted in authority and integrity. That’s why we made a different choice: to keep our reporting open for all readers, regardless of where they live or what they can afford to pay. This means more people can be better informed, united, and inspired to take meaningful action.

In these perilous times, a truth-seeking global news organisation like the Guardian is essential. We have no shareholders or billionaire owner, meaning our journalism is free from commercial and political influence – this makes us different. When it’s never been more important, our independence allows us to fearlessly investigate, challenge and expose those in power.