Home / Sports / The Suns broke the Clippers in 0.2 seconds

The Suns broke the Clippers in 0.2 seconds 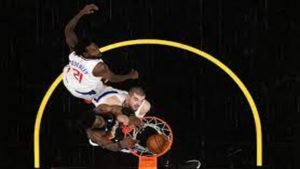 The Los Angeles Clippers erased 2-0 deficits in the first two rounds of the playoffs, but this feels different.

Playing without Kawhi Leonard, whose return from a right knee sprain to the Western Conference finals remains in serious doubt, the Clippers had to win Game 2, and they had it won on multiple occasions — until Phoenix Suns coach Monty Williams scripted what looked to be the end of their 2020-21 campaign.

Speaking of Cam Payne, he logged game highs of 29 points and nine assists almost exactly one year removed from leaving the G League for a non-guaranteed contract to play with the Suns in the bubble, but the undersized and unheralded point guard’s heroics were lost to history by a game-winner for the ages.

Leading 103-102, the Clippers needed one more stop after a missed Mikal Bridges corner 3-pointer caromed off a crowd, ultimately giving Phoenix possession on the opposite corner with 0.9 seconds left. A replay review allowed Williams to draw up a play, and what a play it was. Suns star Devin Booker served as a decoy. His back-screen on Clippers center Ivica Zubac freed DeAndre Ayton to corral a perfectly timed lob at the rim from Jae Crowder, and the resulting dunk took all of 0.2 seconds to dig the Clippers’ grave.

It was a play Phoenix knows well. Three seasons ago, with 0.6 seconds remaining in a tie game, interim Suns coach Jay Triano called “Rim,” the same play, only with 34-year-old Tyson Chandler on the receiving end of a lob from draft bust Dragan Bender. The play was almost a decade in the making, complete with prior assurances from officials that the touch dunk on an inbound did not constitute goaltending. It worked.

That was a late-December win over the Memphis Grizzlies, one of 21 in a dreadful season that resulted in the No. 1 overall pick. This was a Western Conference finals victory capped by Ayton, the very same pick.

Ayton’s defining moment punctuated a wild final 90 seconds of game action that featured five replay reviews and lasted 33 real minutes. In between, Clippers star Paul George was both a hero and a goat.

Down the stretch, Patrick Beverley drew a questionable offensive foul against Booker on one end, and George drew a questionable defensive foul against Booker on the other, resulting in two free throws that sliced a Suns lead to 100-99 with 56.7 seconds on the clock. A Zubac block then sent George splitting the defense for a transition layup that gave the Clippers their first lead of the fourth quarter 16 seconds later.

Booker and George traded picture-perfect midrange jumpers over the next eight seconds that netted a 103-102 Clippers lead with 22.2 seconds left, and then an off-the-rails game careened over the edge. (Did we mention that Booker was playing with a nose that is surely broken and will require a protective mask?)

With 9.2 seconds remaining, Beverley poked the ball loose from Booker out of bounds, only for another replay review to confirm that the ball last touched Booker’s fingertips. This set off a heated debate over intent versus letter of the law that deserves its own story and somehow also ended up a meaningless call.

For on the other end, George missed both free throws with a chance to put the Clippers up three in the final seconds — a devastating turn of events for a player who had just shed his reputation for playoff collapses.

It was Ayton who emerged the conqueror, even if Payne’s 29 points and Crowder’s perfect pass were just as instrumental. ESPN’s Adrian Wojnarnowski reported at halftime that Ayton will join Luka Doncic and Trae Young in line for a maximum extension this summer, and that was before the third-year center put the finishing touches on a line of 24 points (12-15 FG) and 14 rebounds, bookended by the abuse of Zubac.

It is not just that the Clippers will have a tough time recovering from such a backbreaking loss. The Suns are also set to add Chris Paul off the NBA’s COVID-19 health and safety protocols as soon as Game 3. It would take a miracle equal to Tuesday’s game-winner for the Clippers to keep Phoenix from the Finals.