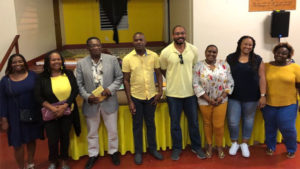 The PAM’s Annual Caucus, which was held on Sunday 8th April, was well attended with delegates from all 8 eight constituencies. The enthusiasm that was demonstrated by the leaders and supporters was astounding.

The new executive elect is made up of five (5) women and three (3) men. The Hon. Shawn K. Richards ran unopposed and was re-elected as Party Leader, as well as, Jonelle Rawlins and Jacqueline Howell who were re-elected PRO and Assistant Gen. Sec, respectively. Ms. Natasha Grey, former Deputy Chairperson, also ran unopposed and was elected the new Treasurer of the Party.

We extend many thanks to Val Henry who was the facilitator of the Open Discussion, and to the Supervisor of the elections, Mrs. Rivi Lake and her team.

All positions will be ratified at the Party’s 53rd Annual National Convention to be held on Sunday 22nd April at 2:00pm at the Party’s Headquarters. The Party Convention’s theme for this year is “Together we Succeed!” All are invited to attend this grand occasion.