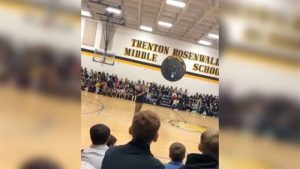 A Tennessee community has blasted a principal for using a racist slur during a school assembly, but the district’s leader has asked community members to consider the principal’s “intent and the context in which he used the terms.”

In a statement posted on the district’s website, Trenton director of schools Tim Haney said Pillow used the slur while addressing students about “behavioral expectations.”

“We offer no excuses for it and will own any criticism of it,” he said. But he nevertheless defended Pillow, saying he was only reiterating what he had heard students say.

“[Pillow] was attempting to eliminate the use of a couple of derogatory, racially charged terms and, in so doing, made what he and I both consider to be a mistake in his method of delivery in that attempt. For that, we apologize and commit to better communication methods going forward. But I would ask everyone to please consider his intent and the context in which he used the terms,” he said.

He said Pillow “informed me of the nature of his message and of his regret as to how it was delivered” and they both “agreed that some time away from the principals’ chair was in order.”

Haney added that district administrators were “distressed” over the situation and “will work to better handle future situations.”

In a Sept. 16 Facebook post, a parent named Kassy Jones shared three videos with a caption that said, “Trenton rosenwald middle school at its finest! This was this morning! I have 2 children that was in this gym! An[d] they wonder why it’s so many problems in this school ! I have no issues with elementary or high school but thissssss is far from professional Smdh.”

The middle school, based in Jackson, serves fifth to eighth grade students.

In the videos, a man—identified as Pillow—can be heard speaking. Two of the videos contain audio only.

“You don’t deserve it here!” Pillow yells in the midst of muffled speech during one clip. “I’m sick and tired of this. I get about 10 parents a day calling and complaining about our teachers and the way that our teachers are treating you. Well, what about the way you’re treating us?”

In the second recording, Pillow bellows, “It will not be tolerated! And if you don’t like what I’m saying, again, GET OUT!”

Pillow continues screaming at the room, threatening to call the police on students because of their behavior. There’s more muffled talking as a female voice seemingly directs a student to stand up.

In the third clip, students are seen sitting in a packed gymnasium. “Trenton Rosenwald Middle School” is painted on a wall in black and gold. Pillow, a white man, stands in the center of the room addressing the crowd as more students walk in and try to find seats.

“We just don’t know how to talk to each other ‘cause the white kids want to call the Black kids n—–,” Pillow says, prompting students to mutter to one another.

“Nuh uh, don’t say it because you’re the ones that are saying it!” he yells. “And the Black kids wanna call the white kids crackers!”

“I just got that on video!” whispers the student recording the incident.

As of Wednesday afternoon, the video had nearly 200 Facebook shares.

“Definitely could have been addressed in a different manner,” Calandra Langston commented under the post. “Seems the school is aware, now let’s put the word into action and have consequences for the students who feel they can get away with hateful words and bullying!”

“He could have said the ‘N’ word PERIODT!!! He’s part of the problem!” Rachel Lee wrote.

“Oh wow that’s beyond fckd up,” Kamron Rose wrote under the video. “He need to be fired. Don’t nobody children wanna hear that shi[t].”

On the other hand, some community members said they understood where the principal was coming from despite his delivery.

“I really don’t see a problem and it sounds like the principal is fed up,” Kimberly Renee Reed wrote. “There are plenty of white people who say this word loosely but when he said it now it’s a problem.”

Trenton Rosenwald assistant principal Jessical Murray, who is filling in for Pillow, did not immediately respond to The Daily Beast’s request for comment.