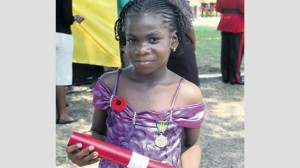 KINGSTON – Yesterday, Jamaica honoured its sons and daughters from all walks of life as 233 people received awards, ranging from the Order of Jamaica to the Medal of Honour.

But none stood taller than ten-year-old Toni-Ann Miller who received the Badge of Honour for Gallantry at the Investiture of National Honours and Awards at King’s House in St Andrew.

On the afternoon of May 15, 2013, Toni-Ann was on her way home from school with her friends in the community of Mount Hermon, St Catherine, when they came upon a house emitting thick black smoke from the windows.

They heard a child crying inside and without hesitation, Toni-Ann ran inside the burning building, pulled the young child to safety but soon realised that his younger brother was still inside the house.

Without giving a thought to her own safety, she returned into the house, found the little boy lying on the bed which was partially ablaze and quickly took him outside.

With Toni-Ann’s quick thinking and act of heroism, the older of the two brothers (six) escaped unhurt; however the younger brother (five) sustained minor burns to one of his arms.

The recounting of the story brought tears to the eyes of several in the audience.

Awards were also conferred to people in the several sectors, including legal, sports, entertainment and education. (PR/SAT)