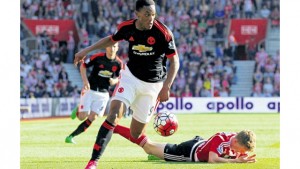 LONDON, England (AFP) — Teenage striker Anthony Martial further endeared himself to Manchester United’s supporters with a nerveless brace as his side came from behind to win 3-2 at Southampton yesterday.

Scorer of a memorable solo goal in last weekend’s 3-1 win over Liverpool, 19-year-old Martial struck either side of half-time at St Mary’s after Graziano Pelle had given Southampton a 13th-minute lead.

Juan Mata added a third in the 68th minute and despite Pelle scoring again, United held on for a victory that propelled Louis van Gaal’s side up to second place in the Premier League table, two points below leaders Manchester City, who lost 2-1 at home to West Ham United on Saturday.

“Anthony Martial is already special because we paid a lot of money for him,” Van Gaal told the BBC.

“A lot of people are thinking he is a great star, but he is a boy of 19. In three matches he has shown a lot.

“I am very happy with him, but we and he have to keep our feet on the ground.”

Martial, who signed from Monaco on transfer deadline day for a reported initial fee of £36 million (US$55 million, 49 million euros), started up front alongside Wayne Rooney, who returned following a hamstring injury.

Southampton went ahead when Pelle followed in to score after Sadio Mane’s shot from James Ward-Prowse’s inviting right-wing cross had been parried by visiting goalkeeper David de Gea.

Pelle hit the post moments later, but Martial equalised in the 34th minute, throwing Virgil van Dijk off balance with a neat Cruyff turn inside the box and slipping a shot beneath Maarten Stekelenburg.

He put United ahead five minutes into the second half, seizing on a woeful Maya Yoshida back-pass and coolly beating Stekelenburg, before Mata slammed home after Memphis Depay’s shot came back off the post following a hypnotic 44-pass move that Van Gaal described as “fantastic”.

While Martial again stole the headlines, United were also indebted to De Gea, who produced a jaw-dropping one-handed save to claw a Jose Fonte header off the line when the score was 2-1.

Pelle converted a cross from Mane with a well-placed header four minutes from time, but United survived.

United’s old rivals Liverpool continue to struggle, having seen their run of league games without victory extended to four following a 1-1 draw at home to Norwich City.

Daniel Sturridge made his first appearance since April after hip surgery and his side went ahead in the 48th minute when Danny Ings, a half-time replacement for Christian Benteke, drilled home his first Liverpool goal.

But Norwich equalised 13 minutes later courtesy of a deft lob by centre-back Russell Martin, whose preparations for the game were disrupted by the birth of his son the previous night.

“I was late for the game as I made it back home last night for the birth of my son,” said Martin, who has scored three goals this season.

“Then I shot back up on the plane today with the directors, so it’s a fantastic day and an emotional day.”

The result left Brendan Rodgers’s Liverpool in 13th place, seven points below City, but a point above defending champions Chelsea, who beat Arsenal 2-0 on Saturday in a game that saw Gabriel and Santi Cazorla sent off for Arsene Wenger’s side.

“It is disappointing and frustrating not to get the three points,” said Rodgers. “But you have got to be clinical and we didn’t take those chances.”

The South Korea international struck in the 68th minute at White Hart Lane, moments after Spurs goalkeeper Hugo Lloris had tipped a shot from Bakary Sako onto the post at the other end, to give the hosts a 1-0 win.

Son has now scored three goals in two games, after his debut brace against Qarabag of Azerbaijan in the Europa League, and Spurs coach Mauricio Pochettino hailed his impact following his move from Bayer Leverkusen.

“When you sign players you expect them to make a big impact in the team. We are very happy with him,” said the Argentine.

“He has adapted to the team very well. After scoring twice in the Europa League he scored again and when you arrive at the club as a striker, that’s very good.”

It was Spurs’ first home win of the campaign and lifted Pochettino’s side to ninth place in the table, below Alan Pardew’s Palace on goals scored.