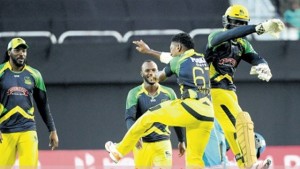 In the first official cricket match under floodlights at the venue, the Zouks batted first and though they struggled early on, accelerated toward the end of their innings to make 158-4 off the allotted 20 overs.

Former England batsman Kevin Pietersen sparked with 83 not out from 57 deliveries for the Zouks.

Chasing 159 runs for victory, the Tallawahs openers Chadwick Walton and Christopher Gayle made light work of the reply. The pair added 119 runs to lay the platform for the easy win. Walton made 76 off 48 balls, while the left-handed Gayle was left unbeaten on 64 from 42 deliveries, as the Tallawahs won with a whopping four overs to spare.

The Tallawahs, who moved up to six points, play again at Sabina Park tomorrow. The Zouks, who remain on seven points, face St Kitts & Nevis Patriots at Warner Park on Friday.