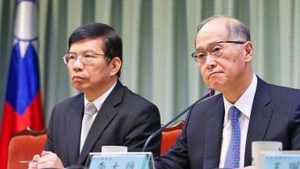 Minister of Foreign Affairs David Lee (at right) and Deputy Minister of Transportation and Communications Wang Kwo-tsai at the news conference in Taipei Friday, following the announcement that the ICAO had not invited Taiwan to the Montreal aviation summit starting Tuesday.

TAIPEI, Taiwan — Taiwan’s Minister of Foreign Affairs David Lee says his government regrets and is disappointed that it was not invited to attend this week’s world aviation summit in Canada — and it believes the decision “is a mistake”.

The 2016 Assembly of the International Civil Aviation Organization (ICAO) starts on Tuesday in Montreal and continues until October 7. But up to Friday – four days before the meeting – no invitation had been received from the ICAO.

“It is extremely unfair to Taiwan and a great loss to international flight safety,” Lee told a news conference in Taipei on Friday after the government announced it had not received the expected invitation from the ICAO president – and did not expect to, at this late stage.

President Tsai Ing-wen also made her feelings known, saying that “Flight safety is a basic human right” and “should not be affected and deprived due to the intervention of political factors.”

And like the president and foreign affairs minister, he too said that “Aviation safety is not confined to national borders and should not be trumped by political ideologies.”

Taiwan’s premier, Lin Chuan, said Taipei’s rejection “is an unreasonable treatment and oppression, to which we are here expressing our gravest regret and disappointment.”

The DPP’s Lee Kun-tse said China obstructed Taiwan’s participation and has compromised aviation safety by insisting on its “One China” political framework.

Taiwan’s Mainland Affairs Council (MAC) Minister Katharine Chang said the MAC told its Chinese counterpart that “It is Taiwan’s right and obligation to take part in international organizations with no strings attached.”

She said it had also “tried to negotiate over (Taiwan’s) ICAO attendance with it, but unfortunately, our olive branch failed to receive a positive response.”

Deputy Taiwan Minister of Foreign Affairs Javier Hou said the ministry had been planning to participate at the Montreal meeting “since the beginning of the year.”

“Our allies and friends had sent letters to the ICAO president, voicing their support, while some did so face-to-face,” he said.

The MAC’s Chang, for her part, said: “I sincerely call on China to free itself of the burden of history and engage in communication with an open attitude to solve cross-strait issues.”

DPP Legislator Lee Kun-tse noted, with regret, that Taiwan attended the ICAO meeting in 2013 “as a guest, not even an observer.”

He explained, “The invitation sent from ICAO every year has not been an institutionalized arrangement, but an invitation from the [ICAO] president, which has given China the chance to elicit whatever it wishes from Taiwan every time.”

Taiwan’s Caribbean and Latin American allies were among those who assured Taipei of their support for its bid to attend the Montreal meeting.

In the Caribbean Community (CARICOM), Belize, St Kitts and Nevis, Saint Lucia and St Vincent and the Grenadines all supported Taiwan’s attendance at the last ICAO Assembly in Montreal three years ago – and again this year.

But Beijing insisted that for Taipei to attend this year it had to recognize the 1992 Consensus, which recognizes the One China policy – and which President Tsai and the ruling DPP administration in Taiwan has refused to embrace.

Meanwhile, the DPP is coming under pressure from within Taiwan to up Taiwan’s ante and adopt a harder policy towards the mainland.

The New Power Party (NPP), in a news release, called on the government to draft a new strategy for facing China, including using the name “Taiwan” to address the world.

The “extreme self-restraint” exercised since the DPP took office in May has had “no effect,” with China stepping up international pressure across the board, the party said.

“Soft earth only gets dug into more deeply,” the party said. “If you just make one retreat after another, you will only get backed into a corner.” (The Diplomatic Courier)