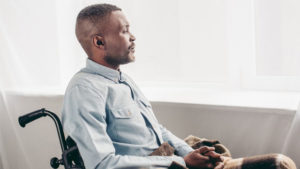 A day after the La Soufriere volcano erupted in St Vincent on April 9, Uncle Joe’s daughter, her children and her husband started packing bags to vacate the Red Zone.

Nothing much was said to Uncle Joe, 67, but he figured he should start packing too, so he placed a few items in a “nice” suitcase.

Then the house fell silent.

“By the time I finish and went back outside,” Uncle Joe told Loop News, “the house empty — and quiet, quiet!”

Unable to bring himself to accept the reality of what had transpired, Uncle Joe — who’s been crippled for the past seven years — wheeled himself from one room to the next, looking for signs they were still around.

“They leave me but they take the cat,” Uncle Joe said, between pauses, heavy breathing and sniffles. “The cat is more family than me.”

He added: “If I live 100 more years I wouldn’t forget this. How I could forget this? You see this [wheelchair] — this is how I get around, is only so far I could go on this on my own. They know that and they still leave me.”

The man — who asked to be referred to as Uncle Joe so as not to embarrass the people who abandoned him — said he came close to wishing he had died, so he wouldn’t have to deal with being deserted.

“Night follow day, then night come again and I was still in that house by myself. Is trouble to breathe… plenty trouble. I am not even feeling shame to tell you I cry like a baby. When the place get dark, I just cry and pray.

“Thank God He hear me because the next day some friends who live about four houses away pass. They told me it worse than they expected so they changed their mind and were leaving. The boys put me in a car, put my chair in the back of a van and that’s how I come to be down here. See why it important to live good with people?”

As he told Loop News his story, Uncle Joe was unable to hold back the tears. Resting his hands on his forehead in despair, Uncle Joe wept as he spoke. A man present during the interview walked away overwhelmed by his story.

In the wake of the explosive volcanic eruption on April 9, reports started surfacing that numerous elderly persons were abandoned in the Red Zone by their loved ones — a situation that was bemoaned by Prime Minister Dr Ralph Gonsalves.

“What comrade Ralph said on the radio is the truth. Just look at me, my family decided to evacuate and they just leave me. People feel the old people who stay in the red zone just stubborn and set in their ways… some, maybe but not all of them. Some want to leave but need help to move around so they can’t leave alone; then [you] have people like me who were ready to leave and get left behind anyway. Don’t believe everything you hear because I wanted to leave but my family take the cat and leave me,” said Uncle Joe.

Uncle Joe — who became wheelchair-bound by a back injury that was left untreated for too long after a fall — told Loop News that he makes it a point to thank God for small mercies each night before bed, even though he’s been unable to work and his retirement is nothing like he imagined.

Also, he said he’s determined each day to find the silver lining in every dark cloud.

“Plenty of people my age never own a house. I own my house, so I am thankful for that. It is not a mansion, but it comfortable,” he said about his home in the red zone.

“We have a flush toilet and enough bedrooms for my daughter and her family to stay with me. The best part of that is I get to see my grandchildren every day. They noisy, but is so I love them. I have family and we have shelter. That house, it on my name but it is our house, family security,” he said.

That was before he was left to fend for himself in the house that became a prison for him until he was rescued.

Uncle Joe said he has not heard from his daughter up to Wednesday, April 21.

Should the opportunity arise, he said, he has one question for his family: Why?

“When this volcano go back to sleep and the government clean away the ash I don’t know… I just want to know why…. why you will leave me up there by myself without even saying anything.

Uncle Joe said he longs to see his daughter and grandchildren despite what transpired. The tears started streaming down again and he took long pauses attempting to compose himself.

“Somebody tell me they staying in a place down the road [in the Green Zone],” he said. “I know it not easy for them, it not easy for anybody… I missing them plenty. My grandbabies with me since they born, now… well the Heavenly Father knows all so…”