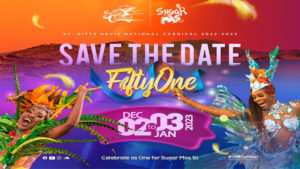 The St Kitts Nevis National Carnival Committee (SKNCC) has announced the dates for Sugar Mas 51. Chairperson Shannon Hawley stated that the month-long festivities will commence on Friday December 2, 2022 and conclude on Tuesday January 3, 2023 with the announcement of winners and the Last Lap Parade through the streets of Basseterre.

During the Carnival period, all major events will be staged. These include, National Carnival Pageant, Panorama, Soca and Calypso Monarch, Jouvert, Junior Parade, and the Grand Parade. In addition, major events hosted by private Promoters will also return to the Sugar Mas Calendar after a two- year hiatus.

The Calendar of Events will be released in the near future, after a series of planned stakeholder meetings during the month of September. These fora are designed to provide information and solicit suggestions from regular participants and new entrants in all aspects of the annual Festival. The return of J’ouvert and the Grand Parade are highly anticipated, and many Grand Parade Mas and J’ouvert Troupes have already indicated their participation.

The SKNCC’s Chairperson Shannon Hawley has to date met on several occasions with the new Minister of Culture, Hon. Samal Duggins who has pledged his full support for the end of year Celebration. The National Carnival Executive Committee will be revealed shortly.

Sugar Mas is the Country’s premier cultural festival and participation is encouraged by all nationals and residents of the Federation. Registration for all stakeholders ends on Friday September 9, 2022 and could be done online at skncarnival.com or in-person at SKNCC’s office in the EC Daniel Building on Cayon Street.