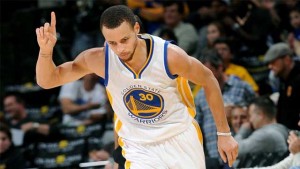 Steve Kerr put JaVale McGee in his starting lineup, and it worked perfectly
Headlines were made before the game even started, with the Warriors officially ruling out Andre Iguodala, who continues to recover from a bone bruise, and announcing that Thompson and Patrick McCaw would play. Thompson suffered a high ankle sprain in Game 1.

While that was expected, Warriors head coach Steve Kerr changing his starting lineup was not. Kerr removed young big man Kevon Looney from the starting lineup in favor of JaVale McGee. Looney scored eight points on 4-of-5 shooting in Game 1 but was a team-worst minus-10. The Cavaliers also dominated the boards — 53-38 — and 19 of those came on the offensive end. McGee was a plus-seven in just six minutes in Game 1.

It paid immediate dividends: McGee put home wide-open dunks on Golden State’s first two possessions. Overall the Warriors scored five straight buckets in the paint on either layups or dunks to open the game before Thompson splashed a three and Draymond Green slammed one home on the break as the Warriors jumped out to a 15-7 lead behind 7-of-7 shooting, forcing a Cleveland timeout.

The Warriors operated at a high level on the offensive end in the first quarter, shooting 15 of 23 (65.2 percent) from the field. But the Cavaliers hung tough after the hosts’ hot start and trailed just 32-28 after the first period.

The Warriors surged ahead in the second quarter
The Cavaliers continued to hang tough in the early part of the second, and they whittled the lead down to four — 40-36 — after a traditional three-point play from Kevin Love.

But then the Warriors went on a quick run that has made them the league’s most dangerous team for the past several years. A 7-0 spurt, capped by an off-the-dribble three from Curry, gave the Warriors their first double-digit lead of the night, 47-36.

Curry hit two more deep threes in the half, and the Cavaliers struggled to keep pace with one of the game’s all-time great shooters. Led by Curry’s 16 points, the Warriors led 59-46. Golden State shot 59.5 percent from the field and a sterling 82.6 from inside the arc.

The Cleveland offense got going in the third quarter, but Golden State answered
The Cavaliers were just 3-of-10 from deep in the first half, but they made five of their first seven out of the break.

The visitors looked to be in good position to go into the quarter down within single digits after a three from Love brought it to 76-71, but the hosts turned on the jets again over the last few minutes and led 90-80 after three quarters, thanks to a corner three from David West. It was a big shot for the Warriors to keep their distance and a surprising one, too: Up to that point, West had played over 3,100 minutes of playoff basketball and had made just two triples.

Still, it was a solid 12 minutes for the visitors. The Warriors have thrived in third quarters throughout the playoffs and have owned the league’s best third-quarter point differential four seasons in a row. That the Cavaliers made up ground was a good sign; that they remained down double digits despite the initial hot start proved costly.

Stephen Curry broke the NBA Finals record for made threes in a single game (nine) as the Warriors dominated the fourth quarter
The Cavaliers maintained striking distance early in the fourth, but Curry’s seventh and eighth threes proved to be a pretty perfect summary of the night as a whole.

The Cavaliers — who looked both exhausted and disheartened — removed their regulars with about four minutes remaining and shortly thereafter, another dominant performance from the defending champions was in the books.

The Warriors’ role players were terrific
The biggest adjustment for the Warriors was bringing in the mercurial McGee for Looney. McGee set the tone early with two powerful jams and finished the night with 12 points. He was terrific on both ends, but it was on the offensive end where his impact was felt most: Surrounded by terrific shooters, the Warriors need big men who can roll off screens, catch and finish at the rim. McGee was a perfect 6 of 6 from the field.

Shaun Livingston’s midrange game was once again immaculate: The wiry point guard was also flawless shooting the ball, knocking down all five of his attempts. He also added five rebounds and was a plus-eight in 15 minutes.

It was another rough night for J.R. Smith
Just 48 hours after committing one of the most infamous errors in NBA history, J.R. Smith looked for redemption with a big Game 2.

The rowdy Oracle Arena crowd cheered him in introductions and mockingly chanted “MVP” at him when he shot a free throw in the first quarter. The streaky wing man shot two of nine from the field and one of four from deep. He missed many open looks but also took some contested ones that resulted in open-floor opportunities for the Warriors.

The good thing for Smith is that his team returns to Quicken Loans Arena for Game 3, and he has thrived there this postseason. He’s shooting 38.5 percent from the field in Cleveland (compared with 32.0 on the road) and is a plus-5.8 per game at home (compared with minus-3.8 on the road).

George Hill, who also got cheers after his missed free throw set up Smith’s mishap, responded much better, scoring 15 points and adding two steals, three assists and just one turnover.

Cleveland needs to make changes
Kerr made changes that put his team in an advantageous position, and now it’s Tyronn Lue’s turn. A player such as Smith seems bound to bounce back, especially at home, given his track record. But there are other personnel decisions to be made.

Mid-season acquisition Jordan Clarkson has been disastrous this series, shooting 3-of-13 in the two games combined and looking completely out of rhythm. He played just eight minutes in Game 2 and could be dropped from the rotation entirely in the coming days. Fellow trade acquisition Rodney Hood — who offers better length and a more diverse game — could be a potential replacement.

Necessary adjustments go deeper than that, though. The Cavaliers were particularly putrid defending pick-and-roll situations on Sunday, and they ended up in several difficult situations — Hill defending Durant in the post, for example — even when they rotated well. Part of that is what makes Golden State so good. Its offensive portfolio is so diverse. But Cleveland must make an adjustment: Durant scored 26 points despite attempting just three 3-pointers, the fewest he’s taken in a game this postseason.

If the Cavaliers want to have a chance in this series, they’ll need to win at home — a place they have haven’t lost since the first game of the postseason — in Game 3. The game tips off at 9:00 p.m. ET.