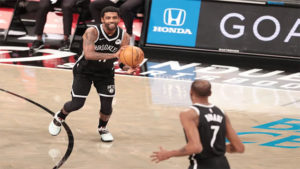 Rumors of Nets star Kyrie Irving being traded started months ago. There have been no signs from Irving or the Nets organization that have proved any of these rumors to be legitimate. In fact, the only thing that was revealed to the media was the goal of extending Irving’s contract to stay in Brooklyn.

Amidst the Ben Simmons mayhem in Philadelphia, the Sixers are looking for a suitor to trade for the three-time All-Star. Unfortunately for them, the team has not found any luck in that department and this is only frustrating the 25-year-old. With training camp starting next week, the Sixers star made it known that he is finished with the Sixers organization and will not play for them again.

Although there is so much drama revolving around where Simmons will end up, the Nets have now been linked to a potential blockbuster trade – at least according to Stephen A. Smith. Smith said on ESPN’s First Take that “Kyrie (Irving) could have ended up in Philly. Sean Marks couldn’t do that because KD wasn’t having it. KD wasn’t having it. KD is like, ‘Kyrie ain’t going no damn place.’”

Smith then reiterated Kevin Durant’s impact in preventing this trade from happening, but later clarified that no Nets-Sixers trade has been attempted.

“If it were not for Kevin Durant, the Brooklyn Nets would be interested in making that deal because let’s call it what it is — If Ben Simmons was in Brooklyn with KD and James Harden, it’s a wrap. It’s a wrap. They’re winning the chip.”