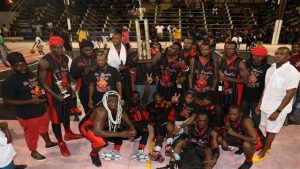 The Browne Construction St. Pauls Tuff Knots have done it once again and they have done it in very impressive fashion. They have successfully defended their SKNABA National Bank Premeir Division Championship with an easy, comprehensive and impressive clean sweep drubbing of the former 19 Times Champions the RAMS Hitters.

In what has been described as the most One-Sided Finals victory in the history of the league the St,Pauls Tuff Knots dominated and crushed the RAMS Hitters in a 40 plus point blow out on Sunday evening the eve of Independance. The Tuff Knots raced to a 20-14 advantage at the end of the first quarter.

This 6 point advantage ballooned to an 18 point 38-20 advantage at the end of the first half. The 3rd quarter was more of the same with the rural west team Tuff Knots again outscoring their Basseterre counterparts Hitters. By the time all the quarters were ended the St.Pauls Tuff KNOTS were up by some 42 points and a 82-40 victory in the most lopsided finals victory in the history of SKNABA. History was also made as Hitters became the first team to be swept in a SKNABA Finals.

The Tuff Knots successs definately came as a a result of the simply amazing play of MVP Nashorn Maynard who was again voted the Finals MVP and who averaged 20 pts and an amazing 22 rebs per game . The Hitters defense simply could not contain Nashorn. A dilemma that faced every single team that the regular season champions Tuff Knots faced during the season.

The Deputy Prime Minister and Minister of Sports the Hon. Shawn K Richards was on hand to handover the National Bank Championship Trophy to the Tuff Knots . The MVP Nashorn received his hardware from the General Secretary of the SKNOC Mr. Glen Jeffers.

Top Performers for the game were: