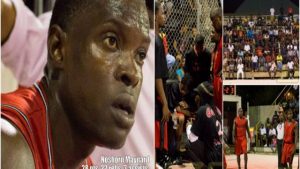 Basketball City, St.Kitts (Sept 1st 2016):- The 2016 National Bank Premier Division Finals is now set as the Defending Champions Browne Construction St.Pauls Tuff Knots got by the SOL Fig Tree REVELLERS with a 77-70 Victory in the final game of the 3 Game Final Four Series.

The Game was an exciting and close from start to finish throughout most of the 4 quarter. However it a late 4th Quarter surge by St.Pauls gave them the hard fought victory. Noshorn Maynard the reigning league MVP again proved that he is without a doubt the best player in the league as he led the way with a monster 28 pts, 22 rebs, 3 assists , 5 steals and 7 Block Shots. Karris “Bol” Douglas had 12 pts 7 rebs, 4 assists and 4 steals while exciting guard Clayton Powell had 9 pts, 3 assists, 4 steals despite an injured heel.

Fig Tree in their losing but very valiant effort was led by veteran National Guard George “Goolay” Gaton who had 26 pts and 9 rebs. Javal Hodge had 13 pts and 9 rebs and Tamboura “Tambie” Caines had 19 pts , 10 rebs, 4 assist and 4 steals.

The SKNABA Bigger, Better and More Exciting National Bank FINALS Series is now set and will see a rematch of last years finals with the Browne Construction St.Pauls Tuff Knots vs the RAMS Hitters. The Finals Series begins with Game 1 of the best of 5 finals series on Sunday September 4th at 8pm at Basketball City .