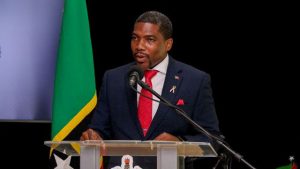 As countries in the sub-region continue to advocate for the protection of their respective Citizenship by Investment Programmes (CIPs), one Caribbean leader says bolstering the security of the programmes is the best place to start.

Countries including Antigua and Barbuda, Dominica, Grenada, St Kitts and Nevis, and St Lucia – who all operate such schemes – have been facing mounting pressure from the European Parliament.

Some members of the parliament say the programmes are objectionable from ethical and legal standpoints, and that they pose serious security risks to EU countries as they currently allow visa-free access to Europe’s Schengen area.

During an exclusive appearance on Observer AM yesterday, St Kitts and Nevis Prime Minister, Dr Terrance Drew, said his government is taking measures to sustain and enhance the image of the twin island federation’s CIP.

St Kitts and Nevis’ CIP scheme was established in 1984 and is the longest-running in the Caribbean.

Dr Drew, who was sworn in as the country’s PM in August, said he had tasked his Attorney General with looking at ways to bolster the scheme.

“He has been working very, very diligently. Two days ago, he presented to me a framework of the regulations that he will bring forward to the Cabinet – a framework to deal with due diligence, to make it more transparent, and make sure there are no more abuses either by agents or those involved,” he explained.

Dr Drew said the “comprehensive approach” would help ensure St Kitts and Nevis’ CIP was “used for the intention it was set up for”.

“Changes need to be made and those changes will be made to make sure we protect the programme, protect ourselves, show that we are open and transparent and are saying to the world that our programme follows the principles of integrity and good governance,” he added.

In response to the concerns from Europe, Antigua and Barbuda has proposed the establishment of a regional CIP regulatory body to assess risks in the respective programmes.

The government also revealed some months ago that Antigua and Barbuda’s Citizenship by Investment Unit had been in dialogue with the European Commission with respect to the Commission potentially auditing its scheme.