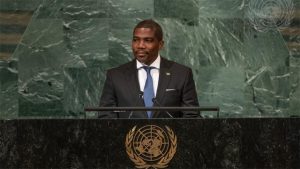 The Prime Minister of St Kitts Nevis, Dr Terrance Drew says the United Nations finds itself at a crossroads in reckoning with history’s judgment.

In his contribution to the 77th General Assembly here on Friday, Drew urged that the world body should not be used merely for political posturing but for “resolute recommitment to multilateral cooperation.”

“For Small Island Developing States, and, indeed, vulnerable peoples everywhere, there can be no international security without climate security,” said Dr. Drew in his maiden UN General Assembly address. “This requires collective fidelity to multilateral action for our very survival.

“I am ready, and I am sure that all of us are eager, to build a better world through multilateral action, and uphold, with all our will and might, this sacred tenet of the United Nations,” added the prime minister during the 77th Session of the UN General Assembly Debate.

“Even as geopolitics and great power competition is exacerbating conflict and the climate catastrophe, we must face the hard truth that only through multilateralism will we force the global trajectory toward global peace, prosperity and sustainability,” he continued.

The prime minister said that Small Island Developing States and other developing nations experience a reality plagued by the continuous existential threat of climate change.

“With the passage of every hurricane, every outbreak of war and every global food shortage, we all remain at risk of tipping the balance that we have striven to create over the years,” he said. “Thus, it is not enough for us to articulate this grim reality year after year.

“We must now look to act in ways that provide tailored responses to these vulnerabilities, so as to foster true resilience and risk mitigation,” he added. “Therefore, I humbly urge countries to honour the financial commitments made following the COP26 to double contributions to adaptation financing by 2025. A delayed response to these commitments would further imperil our developing nations.

“Climate financing, resiliency and environmental conservation must be integrated into national development policies and must be at the forefront of our global development agenda,” he urged, stating that this situation “cries out for the multilateral system to urgently put in place a multidimensional vulnerability index, which takes into consideration the peculiar characteristics and climate vulnerabilities of Small Island Developing States, such as mine.”

Drew said that while all countries are environmentally vulnerable and are socially and economically exposed to exogenous shock, “the climate-challenged, tourism-dependent countries in the Caribbean Sea, during several consecutive months of every year, run the real risk of a wipe out event.

“Surely, this warrants special consideration,” he said. “Caribbean nations are on the ‘bullet end’ of a climate fight we did not cause, do not want, and cannot afford, but are unable to escape.”

The St Kitts and Nevis leader, therefore, join his Caribbean Community (CARICOM) colleagues in calling for the development of a multidimensional vulnerability index (MVI).

He said St Kitts and Nevis will use this index in its advocacy for “a more appropriate redistribution of development assistance and access to concessional financing.”

Notwithstanding what he described as “this injustice”, the prime minister said the twin-island federation continues to invest in social empowerment programs “in order to build resilience in our people and economy.”

He said one such area is education, which is “one of society’s greatest equalizers.”

“St Kitts and Nevis reaffirms that access to quality education is a human right and the foundation of sustainable development and thriving societies,” said Drew, welcoming the Transforming Education Summit that was held earlier this week at the UN.

“And I am happy to report that our government has committed to entering a new pact, A New Deal on Education as it were, that will reform, transform and re-invigorate our education system based on equality, access and inclusion,” he added. “In fact, just a few weeks ago, my government made a decision to introduce free tertiary education to ensure that all people can have equal access regardless of their socio-economic status.”

He said his government’s other goals for educational reforms include, but are not limited to incorporating STEAM specialist spaces in all schools; reintroducing the i-Literacy one-to-one laptop program; and strengthening Technical and Vocational Education by providing alternative programming and scholarships.

As part of his administration’s thrust to mainstream empowerment across all sectors and policies, the prime minister said St Kitts and Nevis will continue to put women and youth at the forefront of social development and all pursuits, including the advancement of the digital economy.

“We are confident our active inclusion of women and youth in public life, through their appointment in our parliament, diplomatic and senior civil service and other decision-making fora, will bear much fruit,” he said.

“Therefore, it is against this backdrop that we pledge our support to the ongoing process of the Declaration of Future Generations that will culminate in the Summit of the Future next year and pledge, as its leader, my country’s active commitment to meeting goal 5 of the SDG (UN’s Sustainable Development Goals) and surpassing the goals of Belem De Para in achieving gender equity now and for future generations,” he added.

Prime Minister Drew re-emphasized the federation’s “unswerving support” for Taiwan’s meaningful participation in the UN system, stating that Taiwan has been “a long-standing friend and a partner for sustainable development.”

“Their unfailing commitment in this regard, since the very day of my country’s independence, is consistent with the spirit and intent of Goal 17 of the Sustainable Development Goals,” he said.

Drew, who was trained as a medical doctor in Cuba, said he can also “speak first-hand to what our friendship with the Republic of

Cuba and what it means to me and its value to the people of St Kitts and Nevis.

“Cuba has partnered with my own country and many in the developing world in healthcare, education, training and agriculture,” he said, calling for an end to the decades-long embargo imposed against Cuba.

“My country encourages meaningful dialogue in resolving these and other conflicts in countries that are targeted by unfair sanctions that create enduring external and internal hardships,” the St Kitts and Nevis leader said.

“We must be bold and grand in the way we forge forward with a promise to leave no one behind,” he added. “My government and I are prepared to do our utmost for our people, which would be enhanced by multilateralism, and the United Nations should afford to this opportunity to all.”