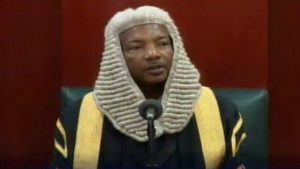 BASSETERRE, ST. KITTS – The parliamentary opposition in St. Kitts and Nevis has announced late Tuesday afternoon that it has filed a No Confidence Motion against the Speaker of the National Assembly, the Hon. Michael Perkins.

“I wish to inform the general public that Leader of the Opposition, the Right Hon. Dr. Denzil L. Douglas, representing the members of the Parliamentary Opposition has filed a Motion of No Confidence in the Speaker of the National Assembly,” said St. Christopher 3 (West Basseterre) Representative, the Hon. Konris Maynard on the adjournment of Tuesday’s sitting, believed to be the last for this year.

Last week the opposition issued a statement on what it said was the unprecedented and unmerited ruling of Perkins on Thursday 8th December 2016, which resulted in the suspension of Sen. the Hon. Nigel Carty during his presentation on The Appropriation Bill (2017) 2016.

The Opposition is of the view that over a period of time since the Hon Michael Perkins was the Deputy Speaker, “we have had reason to question his impartiality and his specific targeting of Members of Parliament who sit on the opposition benches.”