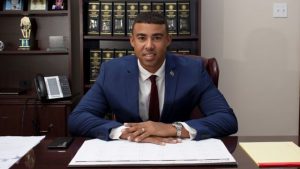 Attorney-General and Minister of Justice and Legal Affairs, the Honourable Garth Wilkin, said that the Government of St Kitts and Nevis is strengthening and improving its Citizenship by Investment (CBI) Programme for enhanced sustainability.

“We are in the process of putting things in place so that we can have the [CBI] Programme for a long time. We are going to do things right … because we see that it is important” said the Honourable Wilkin during his October 13 appearance on Issues SKN on Freedom FM 106.5.

Attorney-General Wilkin said that discussions were held with relevant stakeholders in the sector.

“We have met with local developers – the Prime Minister [Dr Terrance Drew] and I. We have had discussions with international investors, some who want to come into the Federation and some who want to come back into the Federation,” said the Minister. “We have had discussions with existing developers … and all Ministers are aware how it functions and its importance to our economy,” Attorney-General Wilkin added.

The Attorney-General reflected on the CBI Programme’s durability since its inception in 1984 and added that the Government, and by extension St Kitts and Nevis, is “proud of its successes, benefitted from its success” and is desirous of enhancing its sustainability.

He said that the CBI Programme must be administered such that all stakeholders can have an equal opportunity to benefit. Therefore, improved investment options are being formulated for swift implementation.

“We are having consultations with the various stakeholders and the legislation provides for certain committees to be set up to supervise the process. The Prime Minister is about to appoint those persons … so that they can then go in and assess [the CBI Progamme] internally,” he said. “We are seeing the macro version … so we want the committees to go in and see the micro version and make recommendations to the Cabinet.”

Attorney-General Wilkin added that the Government will implement strengthened legislative and administrative structures to prevent “underselling” and ensure that real estate projects funded by the CBI Programme are completed. The Government’s plan, the Attorney-General remarked, is to maintain a progressive Programme and cement St Kitts and Nevis’ place as a leader in the CBI Industry.