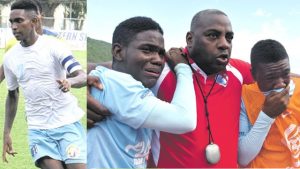 Approximately 43 minutes later, Jamaica’s schoolboy football fraternity was plunged into deep mourning as news came back from University Hospital of the West Indies that the 18-year-old had died.

The tragedy was too heavy for his teammates. They fell to the ground in tears.

There were no dry eyes in the Excelsior camp either as they sought to comfort their opponents.

“This one tough, this one tough,” said a weeping Neville Bell, the St George’s coach. “I was very concerned because I hadn’t seen it [when Dominic fell], but when I looked at his eyes they were very glazed.”

Dominic’s fall was off the ball. But on seeing him go down, the Excelsior player closest to him frantically signalled for help.

Assistant referee Keeble Williams stopped the game immediately. St George’s team physician Dr Ivor Alexander and his counterpart from Excelsior ran to the young man’s aid. Both tried to revive him before he was placed in his father’s Honda CR-V and rushed to the hospital.

Dr Alexander said that Dominic was foaming at the mouth and gasping for breath. “His body was shaking… he showed signs of a seizure,” the doctor said. “We wanted oxygen and couldn’t get any. We put him on his left side, but he was still gasping for breath. By then we got… a vehicle to carry him to the hospital.”

With the youngster off to get medical attention, the game resumed. Akeem Robotham had given St George’s a 26th-minute lead, before the dread-locked Thorne Buchanan struck twice in the 30th and 38th minutes to give Excelsior a 2-1 advantage. However, when the shocking news was delivered on the stroke of half-time the game was called off.

“We had two doctors there and immediately they said ‘take him’. I think we have to give the assistant referee a lot of credit because it was off the ball he went down, and it was the assistant who stopped the game immediately and called us,” said Bell. “That has never happened before. God, I know we have to go on, but boy this one tough,” he said.

“I know he was alive when he left here, but when we called I heard that he had passed. But I pray for his mother and father. He is the only child. He is such a wonderful child. He is a great student athlete, he has so many subjects. He came to us from JC (Jamaica College) a couple of years ago and the fact that he was named captain this year we realised that he was probably the leader for the team, but again, boy, this one tough, it’s almost like I lost my son,” said an obviously distraught Bell.

“It’s not just oxygen, we’re talking the basic resuscitation kit or even an Ambu bag. Mouth-to-mouth resuscitation won’t help. CPR, maybe yes, but that alone won’t help, because after CPR you need backup equipment for the basic support of life, and oxygen included,” said Dr Alexander.

“The entire Jamaica College fraternity is saddened at the tragic loss of young Dominic James,” he told the

After his team’s home match against Vauxhall High. “Dominic started here at Jamaica College and came up through the system. He was a member of the winning Manning Cup teams of 2013 and 2014.

“He transferred [two years ago] to St George’s but he still maintained the relationship with the team. They are totally devastated, so we would like to convey our condolence to the James family on this tragic loss,” Forbes said.

“Like the rest of the country, I am very sad to receive this news,” she said in a statement. “No one expected this. Young Dominic, by all indications, had been doing well. He represented his school well… and had a very bright future. So this is quite a shock. All of Jamaica will mourn with his family and with his school at this time. We all must keep them in our prayers and in our hearts.”

“Other than his representation at the school and club levels, Dominic was just this year a part of the National Under-20 training camp and was a player and leader highly respected,” Burrell said and extended sympathies to “the St George’s College fraternity, the ISSA family, and all those who played with and knew this talented son of Jamaica”