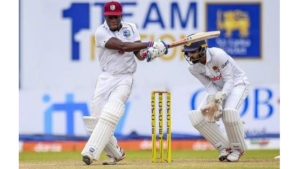 Dimuth Karunaratne missed out on twin centuries but his 83 pushed Sri Lanka to declare their second innings at tea and set West Indies 348 to chase on the fourth day of the first Test in Galle on Wednesday.

The skipper, who posted a brilliant 147 in the first innings, again lifted a side in search of quick runs, with the tourists on the defensive and focused on saving boundaries.

The West Indies picked up two early wickets after opting to attack the Sri Lankans and could have dismissed Karunaratne early, but opted not to review a leg before off Rakheem Cornwall.

His 123-run partnership with Angelo Matthews came off just 150 deliveries.

Karunaratne finally stumbled after attempting to cut Cornwall, a top edge knocking the ball off the wicketkeeper’s gloves and into the hands of first slip.

Karunaratne has been prolific this year with over 850 runs now and an average of 77. He is the world’s third highest run getter in Test cricket for 2021, behind England’s Joe Root and India’s Rohit Sharma.

Cornwall also dismissed Pathum Nissanka as the opener attempted to play a sweep shot but only managed to get a glove and Shai Hope at leg-slip took a good catch diving to his right.

Oshada Fernando was leg before wicket to Jomel Warrican as he played for turn but the arm ball went straight on and had him plumb in front.

The West Indies were 230 all out in the first innings, with nine wickets fallen to Sri Lanka’s spinners. Left-armer Praveen Jayawickrama was the pick of the bowlers with four scalps to his name.

The fourth day’s play was delayed by one hour due to rain. A total of 52 overs were lost on day three due to rain.