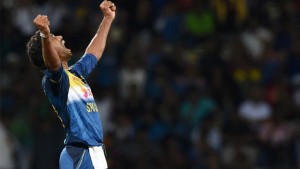 Tillakaratne Dilshan scored a half century and Sachithra Senanayake grabbed four wickets as Sri Lanka defeated the West Indies by 30 runs in their first Twenty20 international in Pallekele Monday.

Sri Lanka made 215-3 after the West Indies won the toss and opted to field at the Pallekele International Cricket Stadium.

The start of the match was delayed by over an hour due to rain, and when play finally got under way all of Sri Lanka’s top-order batsmen were in fine form.

Dilshan hit eight fours on his way to notching 56 while left-handed opener Kusal Perera scored 40 before being caught by Darren Sammy off burly bowler Kieron Pollard for the fall of the first wicket.

Right-handed Dilshan walked soon afterwards when he attempted a reverse sweep and completely missed the ball — Pollard’s second wicket of the night.

Shehan Jayasuriya was on 36 when he was caught and bowled by Sunil Narine.

At the end of the 20 overs Dinesh Chandimal was on 40 while Angelo Mathews was 37 not out, leaving the West Indies chasing a difficult target of 216.

“Thanks to all the batsmen,” said Sri Lanka captain Lasith Malinga.

“They realised these conditions are hard to bowl in and they put up a good total for us.”

The visitors’ chase got off to the worst possible start when opener Johnson Charles was bowled out by Malinga for a duck.

Andre Fletcher tried his best to see that the West Indies at least had a fighting chance, scoring an impressive 57 that included a whopping six sixes.

Dwayne Bravo and Pollard raced to 24 and 26 respectively, hitting two fours and two sixes each and for a moment it looked as though the match would go to the wire.

But several key wickets fell quickly with Senanayake taking Bravo, Sammy and Jason Holder to add to his earlier wicket of Marlon Samuels.

Milinda Siriwardana took two wickets and Malinga grabbed his second of the night as the West Indies were bowled out for 185 in the final over.

“We kept losing wickets in clusters and that slowed us down,” he added.

The two sides will play the second and final T20 in Colombo on Wednesday. Sri Lanka will be seeking a clean sweep after they won the three-match one-day international series 3-0.

They also won the preceding Test series without loss, taking it 2-0.