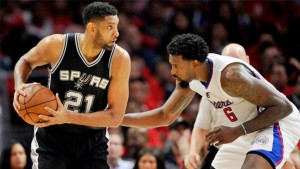 LOS ANGELES — Three days from his 39th birthday, Tim Duncan keeps getting better with age. He smartly stayed on the court while playing the last eight minutes with five fouls, and recovered from a woeful fourth quarter to steady the Spurs in overtime.

“He was spectacular,” Spurs coach Gregg Popovich said of Duncan. “He continues to amaze me with the things that he is able to do. He knows he had to stay on the court and he figured out a way to do it. He continued to be aggressive, which is pretty amazing.”

Duncan apologized to his teammates after going 1 of 5 in the fourth, when Manu Ginobili fouled out and Tony Parker was already gone with a right Achilles’ injury.

“I was awful,” Duncan said. “I missed two or three layups, I made two or three defensive mistakes, got out of position and gave up dunks to DeAndre (Jordan).”

Duncan made up for it in overtime, scoring four straight points, and Patty Mills had eight of his 18 off the bench to give the Spurs a road split.

“Seeing the team play like this today was very important,” Ginobili said. “Hopefully we bring the same sense of urgency, the same fire and juice, for Game 3.”

The series, the only one of eight in the first round that is tied after two games, moves to San Antonio for Game 3 on Friday night.

“This is going to be a helluva series,” Clippers coach Doc Rivers said.

The defending champion Spurs blew 10-point leads in the third and fourth quarters, and got into overtime on a pair of free throws by Mills with 8 seconds left in regulation.

“They are battle-tested,” Clippers guard Jamal Crawford said. “They lose Parker, Mills steps in. Manu is out, (Danny) Green steps in. That is what they do. You have to tip your hat to them.”

Duncan’s jumper snapped a 101-all tie, Mills followed with a fast-break layup off Leonard’s long pass, and Leonard scored on a layup for a 107-101 lead with 56 seconds left.

Blake Griffin had his first career playoff triple-double of 29 points, 12 rebounds and 11 assists, but had a costly turnover with 11 seconds left in regulation.

DeAndre Jordan had 20 points and 15 rebounds for the Clippers, but he was just 4 of 12 from the line in the fourth. Los Angeles missed 17 free throws and had 11 turnovers in the game.

Chris Paul’s two free throws gave the Clippers a 94-92 lead with 50 seconds left in regulation, but Griffin lost the ball while dribbling with a chance to put it away and Mills tied it with two free throws.

“We’ve got to finish,” Paul said. “We’ve been talking about it all season long. We’ve got to execute down the stretch.”

Paul missed the potential winning shot with a 19-footer from the right side as regulation expired. The Clippers were 9 of 21 from the line in the fourth, but they hung in while Spurs were held to two field goals over the final 6:41.

The Clippers failed to follow up their dominant showing in Game 1, when they led by 20 points in the fourth and won by 15.

Mills ended the third with consecutive 3-pointers, putting the Spurs back in front 77-74 going into the fourth.

Green hit the Spurs’ third consecutive 3-pointer to start that quarter, launching an 11-4 spurt that restored their lead to 88-78.

The Clippers cut their deficit to 88-87 on a free throw by Matt Barnes, capping a run of nine straight points, with all but five of them coming from the line.

They tied the game at 90-all on a pair of free throws by Redick.

Spurs: Duncan had his 159th career playoff double-double, tops in the league. … Duncan went over the 5,000-point mark in his playoff career.

Clippers: They fell to 5-6 all-time in Game 2 of a best-of-seven series. … Their seven-game winning streak ended. … Reserve F Jordan Hamilton will remain inactive after sustaining a concussion in practice. … Elgin Baylor, Hall of Fame player and Clippers GM from 1986-2008 who sued former team owner Donald Sterling after he was fired, sat next to new owner Steve Ballmer. Baylor was introduced as “a very special guest” during a timeout and the video board showed highlights of his career.

Ginobili lost track of his fouls when the Spurs went to their Hack-a-D.J. strategy in the fourth, and he ended up fouling out with 3:52 left in regulation.

“I committed one because I was helping Danny on the side,” he said. “I really thought I had three at the time. If I knew I had four fouls, I would have told somebody else. It happened too quickly and I didn’t realize it, but I think we did well to distribute who was fouling.”