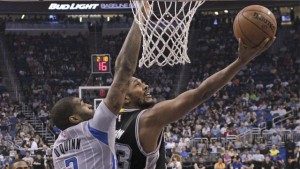 ORLANDO, Fla. — The regular season may be winding down, but the San Antonio Spurs are continuing to play some of their best basketball of the season.

Aron Baynes had 18 points, Manu Ginobili added 13 and the San Antonio Spurs clinched a playoff berth with a 103-91 win over the Orlando Magic on Wednesday night.

San Antonio posted its fifth straight victory. The Spurs are 15-3 since Feb. 27, and have now made the postseason in 18 consecutive seasons.

“It’s not that we are switching it on now,” Ginobili said. “We tried to get it together early, but we just couldn’t, whether it was from injuries or just poor play.

“The main concern right now is just to play well. We’ve had a lot of ups and downs during the season and in the last few weeks except for (a loss to) New York we’ve been pretty steady. That’s a good sign.”

San Antonio trailed early, but connected on 13 of its 29 attempts from the 3-point line as it built as much as a 25-point lead. It was the Spurs’ eighth straight win over Orlando.

Orlando has lost four straight, and 10 out of its last 11.

“We have to grow in our mental toughness right now,” Magic interim coach James Borrego said. “It’s very hard to win in this league, and you have to continue to stay with the process, trust what you do.

“That’s not easy at times, especially when there’s losses in a row and you want to hang our heads.”

Playing in the second game of a back-to-back, the Spurs were able to rest forward Tim Duncan. He started, but played just 12 minutes, scoring six points.

But his teammates didn’t need him to do much.

The Magic briefly had a three-point lead late in the first quarter before the Spurs used a 20-2 run to take a 36-21 second-quarter advantage.

San Antonio was 8 of 15 from the field during the spurt, connecting on four 3-pointers. Meanwhile, the Magic had just one of their 11 shots fall over the same stretch, committing four turnovers.

For the half, Orlando turned it over eight times, leading to 12 Spurs points.

Spurs: With one of his signature bank shots in the third quarter, Duncan marked his 10,000th two-point field goal. He is one of just 11 players in NBA history to hit 10,000 two-pointers. … San Antonio had 12 assists on its 19 made baskets in the first half.

Spurs coach Greg Popovich has nothing but good things to say about Borrego and his potential to succeed as an NBA head coach. Borrego spent seven seasons on San Antonio’s staff (2003-2010), first as an assistant video coordinator and finishing his tenure as an assistant coach. He was part of both the Spurs 2005 and 2007 championship teams.

“He didn’t speak much, but he worked his butt off,” Popovich said. “He made us all look good. Whatever we needed, he knew how to find it on film. … He basically made us smarter, the things he did in the film room.”

Popovich said having another one of his former assistants get a shot to be a head coach is a testament to the Spurs’ organization.

“I guess it means we’ve had some good people come through the program,” he said. “They have great work ethics, high intelligence, and more than anything they really understand people and know what it takes to win.”