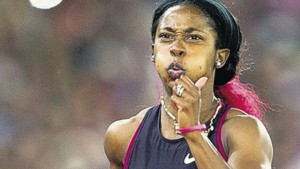 WORLD and Olympic champion Shelly-Ann Fraser-Pryce has sent a warning she will be hard to beat in the defence of her IAAF World Championships 100m title later this year after clocking a worldleading 10.81 seconds (1.7m/s) to win the Diamond League race at the Prefontaine Classic at Hayward Field in Eugene, Oregon, yesterday.

A number of fast times were run at the meet that traditionally showcases middleto long-distance events, threatening to turn it into a festival of speed with Justin Gatlin running the 200m with a personal best equalling 19.68 seconds (0.9m/s) and Grenada’s Kirani James winning the men’s 400m in 43.95 seconds.

Eight world-leading performances were done over the two days of the event that started Friday evening with six women running under 10.90 seconds in almost perfect sprinting conditions at Hayward Field.

After a disappointing fifth place in her most recent Diamond League outing in Shanghai, China, Fraser-Pryce appeared close to her devastating best as she used her bullet start to get a lead on the field before holding off Murielle Ahouré of the Ivory Coast, both given the same time with the Jamaican being given the nod by 2,000th of a second, the width of a thread on their uniforms.

American Tori Bowie, the fastest woman last year, was in third place in 10.82 seconds, just off her personal best of 10.80 seconds, while Nigeria’s Commonwealth Games champion Blessing Okagbare was fourth in 10.87 seconds, her season’s best.

Minutes earlier, Elaine Thompson, the surprise package of the season so far, was just edged to the line by American World Championships finalist English Gardner, both timed in 10.82 seconds, but separated ironically by the same 2,000th of a second as the other race.

Thompson had come into the event with the worldleading 10.92 seconds she had run at the UTech Classic in Kingston, but lost out the race when Gardner just dipped at the line ahead of her.

Brazilian Rosangela Christina Oliveria Santos was third in 11.04 seconds. Gatlin, who leads the men’s 100m ranking, continued where he left off last season, powering his way to the top of the ladder in the 200m in his first race over the distance this season, equalling his personal best set last year.

His countryman Julian Forte was fifth in 20.41 seconds. In the 100m, American Tyson Gay ran a fast 9.88 seconds (1.5m/s), third fastest so far this year to win in his first individual race of the season.

Mike Rodgers was second in 9.90 seconds, beating China’s Bingtian Su, who set a national record of 9.99 seconds, the first Asian under 10.00 seconds.

He did the same time as 39-year-old Kim Collins, while Jamaica’s Nesta Carter was fifth with 10.02 seconds. Commonwealth Games champion Stephenie Ann McPherson ran a season’s best 50.40 seconds for third place in the women’s 400m which was won by American Alyson Felix in her first one-lap race of the season.

Felix got off to a fast start and came off the last curve in front, running away to win in 50.05 seconds, second fastest in the world so far to Sanya Richards-Ross, who was second in 50.29 seconds, her second successive runner-up spot in the Diamond League series.

McPherson, who improved on her previous best of 50.93 seconds that she ran in Doha two weeks ago, finished strong, while Novlene Williams-Mills was sixth in 51.89 seconds and Christine Day eighth in 52.29 seconds.

Andrew Riley, the Commonwealth Games champion, ran a season’s best 13.28 seconds (1.5m/s) for sixth place as France’s Pascal Martinot-Lagarde ran a worldleading 13.06 seconds to upset the field. World record holder Aries Merritt, who is coming back from injuries, was second in a season best 13.12 seconds, while World Champion David Oliver recovered from a poor start to pace third in 13.14 seconds.

World junior champion and national junior record holder Jaheel Hyde had a rough introduction to the senior ranks as he finished seventh in his first major senior outing in the 400m hurdles.

The 18-year-old Hyde, who covered himself in glory on the same track nine months ago when he won the World Junior Championships, struggled around the track and clocked 50.80 seconds, well off his personal best 49.02 seconds done at the ISSA Boys’ Champs in March.