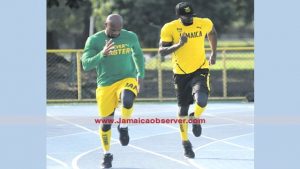 Respected American magazine Sports Illustrated has predicted that Jamaica will win 11 medals, all in track and field, at the XXXI Olympics that gets underway this weekend in Rio de Janeiro, Brazil.

The American publication is predicting that sprint superstar Usain Bolt will retain his 100m, 200m and 4x100m gold medals, becoming the only person in history to win three straight gold medals in the short sprints, but thinks two-time women’s 100m champion Shelly-Ann Fraser-Pryce will fail to win an individual medal for the first time in her Olympic career.

Additionally, while not including her in the top three in the women’s 200m breaststroke, the magazine in its online Olympic special says Alia Atkinson could become the first swimming medallist for Jamaica at these Games.

The publication thinks Jamaicans Bolt and Elaine Thompson, who ran a personal best and national record-equalling 10.70 seconds to win at the JAAA National Senior Championships, will win the 100m gold medals.

Bolt is favoured to finish ahead of two Americans, Justin Gatlin and Trayvon Bromwell, and to beat another American duo in LaShawn Merritt and Ameer Webb in the half-lap sprint. The magazine foresees Thompson winning the 100m, beating Tori Bowie and English Gardner.

Omar McLeod, the world leader in the men’s 110m hurdles, but who fell in his last two races before heading to Rio, is predicted to lead a Jamaica 1-2, with London 2012 bronze medallist Hansle Parchment moving up to the silver and American Devon Allen taking bronze.

The men’s 4x100m team is expected to extend their run in senior global competitions, beating the USA and Canada to the finish line.

Janieve Russell, who has yet to prove her fitness after being granted a medical waiver at the JAAA National Senior Championships, is expected to take the silver in the 400m hurdles behind American Dalilah Muhammed with Ashley Spencer in third place.

Both women’s relay teams, Sports Illustrated claims, will take silver medals behind American squads with Trinidad and Tobago taking third in the 4x100m and Great Britain third in the 4x400m.

Veronica Campbell Brown is predicted to win a third Olympic medal in the 200m, a bronze behind Holland’s Dafne Schippers and Torie Bowie, while Stephenie Ann McPherson should get her first senior individual medal, a bronze in the 400m behind Allyson Felix and Bahamian Shaunae Miller.