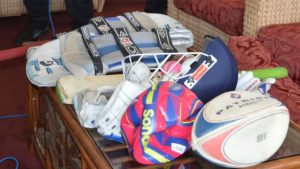 Some of the gear donated by the Dunnington Cricket Club

On Tuesday (April 04), the Department of Sports in St. Kitts took possession of a package of sports gear including footballs, cricket bats, balls, gloves, and pads that were donated by the Dunnington Cricket Club based in the United Kingdom.

Members of the club are in St. Kitts for a March 29 to April 11, sports tourism tour and presented the gears during a brief ceremony at the Warner Park Cricket Stadium. Club Chairman, Dave Bristow, said that this was the fourth time that members of the cricket organization are visiting St. Kitts and Nevis and they typically use such opportunities to give back to the people of the island for being excellent hosts.

He added that this was the first time he was a part of the tour and was impressed with the Warner Park Cricket Stadium – the premiere sporting facility on St. Kitts and Nevis

Permanent Secretary in the Ministry of Sports, Stanley Knight, thanked the club for its donation and said their visit fits into a sports national framework that is being developed.

The plan includes three pillars: Sports for All, making it accessible to everyone; Sports for Development, using it a tool to develop the national infrastructure; and Sports for Excellence, having athletes succeed in the local, regional and international arena. He said the club’s visit fits into the first two pillars.

“It really is a simple vision that means so much to us and it is because of that vision why it is such a pleasure to have you here,” Mr. Knight said.

The club will also donate sports gear to the Children’s Home in St. Kitts, and the St. Thomas Primary School in Nevis. Their visit was organized by Harwood Williams, a U.K.-based national of St. Kitts and Nevis.