Southeast Peninsula Search Leads To Seizure of “Weed and Coke” 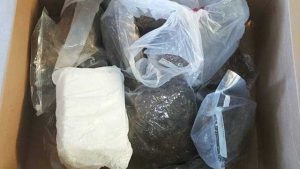 A combined Search Operation by officers of the Special Services Unit (SSU), the Anti-Drug Unit and the St. Kitts and Nevis Defence Force in the vicinity of the ferry landing on the Southeast Peninsula has resulted in the seizure of a large quantity of marijuana and cocaine.

Three persons were detained, interviewed and later released. No one has been charged in relation to this find.

This seizure comes on the heels of one in January in which an arriving passenger at the Robert L. Bradshaw International Airport was stopped and found to be carrying a quantity of cocaine in his stomach.

Commissioner of Police Mr. Ian M. Queeley commenting on the seizure said,” I commend our officers for their work in analyzing information and intelligence. The process of making any seizure especially of this size requires diligence in sifting through, and patience in waiting for the right opportunity.” He added, “our teams are delivering, and I commend them, but we will need the support of community for continued success. I remind you, if you see something, say something. We are all in this fight together.”