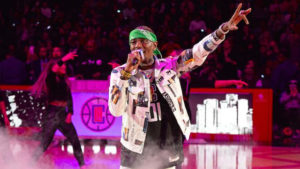 Soulja Boy is back behind bars.

The 28-year-old rapper was taken into custody Thursday, after a Los Angeles judged ruled he had committed multiple probation violations. The hearing stemmed from a February raid on Soulja’s San Fernando Valley home, where he was suspected of holding his ex-girlfriend captive. After obtaining a search warrant, law enforcement stormed the residence and found ammunition during their search. The discovery resulted in Soulja’s arrest, as he was on probation for a firearms-related case.

The “Crank That” artist was released shortly after his arrest, and immediately hopped on Instagram to brag about his “comeback.”

TMZ reports Soulja will be held without bail until his April 30 court hearing.