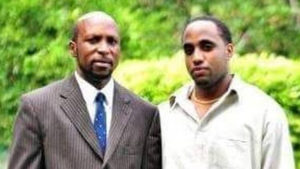 Mayers (30), described as a Uber driver, is said to reside in Tampa, Florida, where, according to local sources, he was sent by his father to escape the attention of law enforcement in Saint Lucia.

The news of his son’s arrest has drawn renewed attention to Guy Mayers himself, who was Saint Lucia’s minister for home affairs and national security at the time of the so-called Operation Restore Confidence in 2009/10, which involved 12 alleged extrajudicial killings by local police, resulting in the imposition by the United States of sanctions under the Leahy Law until such time as there are credible prosecutions of those responsible.
Guy Mayers’ own appointment as high commissioner by the current Allen Chastanet administration in Saint Lucia was widely believed to be a ploy to confer diplomatic immunity on Mayers ahead of any such prosecutions.

At the time, the opposition St Lucia Labour Party (SLP) said that not only did Mayers appointment contradict an election manifesto promise by Chastanet not to use “the Foreign Service as a channel for distributing political favours”, but also Mayers’ diplomatic posting in the United Kingdom, a country that has raised serious concerns over Operation Restore Confidence, represented a grave judgement error by Prime Minister Chastanet that could compromise, complicate and further delay the resolution of this internationally embarrassing matter.

The arrest of Samuel Mayers has also drawn attention to his father’s remuneration as high commissioner; specifically that he enjoys a £2,000 increase in benefits over his predecessors, partly as a result of a £350 child allowance when he has no children under the age of 18 compared to his immediate predecessor, Ernest Hilaire, who had two.