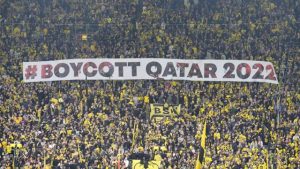 Normally when the World Cup comes around, Germans proudly fly their country’s flag and enthusiastically back their team.

Anyone walking around Berlin this week will struggle to notice any signs of World Cup fervor. There are no flags, no signs, no public viewing events – no indication that the soccer-mad country’s bid for a fifth world title is about to begin with a game against Japan on Tuesday.

Qatar’s human rights record and treatment of migrant workers have spoiled the party for many.

“We don’t want to enjoy a World Cup like this,” Bernd Beyer of the Boycott Qatar 2022 initiative told The Associated Press. “The fans do not identify with it and are saying they don’t want to have anything to do with it.”

There were widespread protests against the tournament during Bundesliga and second division games over the past few weekends, with fans holding banners blasting the human rights situation in Qatar and recent comments by World Cup ambassador Khalid Salman denouncing homosexuality.

The lack of enthusiasm also has had a commercial impact. Retailers have previously capitalised on the buzz around major tournaments with Germany team-related offers. Former Germany coach Joachim Löw and his players could be seen everywhere promoting various goods and services. This time, the Association of German Sports Retailers says sales of fan articles are way down compared to previous World Cup years.

“So far it’s not even half of what is usually sold in stores at major events of this kind,” the association’s president Stefan Herzog told the RND newspaper group.

Adidas said demand for Germany kits was low and that its biggest seller to date was Mexico’s jersey, considered by some to be among the most stylish of the shirts worn by the 32 World Cup teams.

Sales of TV sets, which generally go up for major sporting events, are also down, RND reported.

Chancellor Olaf Scholz’s spokesman, Steffen Hebestreit, told reporters in Berlin on Friday that the German leader will follow the national team’s matches if his schedule allows. He said he wouldn’t rule out Scholz travelling to the final if Germany makes it that far. Asked about fans’ plans for a boycott, Hebestreit said that “this World Cup was awarded and will now take place under difficult circumstances.”

In contrast to previous tournaments, there will be no major public viewing events due to various factors including the cold weather, complications caused by the coronavirus pandemic, and the difficulties staging more outdoor parties during the Christmas market season.