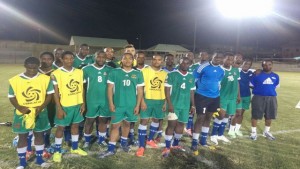 The St.Kitts-Nevis Sugar Boyz handed the Turks and Caicos a comfortable and commanding 6-2 loss in the first match of their World Cup Qualifier.

Led by MLS Star Atiba Harris who scored the opening goal the Sugar Boyz dominated most of the game and showed their superiority over the lower ranked Turks and Caicos.

Atiba was followed by Olando “Ack” Mitcham then Thrizen Leader all in the first half of play.

Tishan Hanley and Errol O’Loughlin scored in the second half to give the Sugar Boyz a convincing 6-2 victory.

The MVP for the Team TCI was the Goalkeeper Shrek who made a number of spectacular saves which avoided a larger trouncing by Team SKN.

The second game of the home and away series will take place on 26th March at the TCIFA National Academy in Providenciales, Caicos Islands in Turks and Caicos.