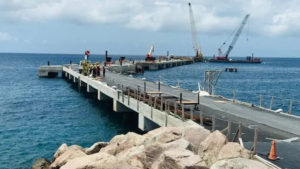 St. Kitts’ new second cruise pier is still sitting idle weeks after the government claimed it had been completed, and according to social and political activist Dwyer Astaphan, with the pier not being operational, huge debts are being racked up with no revenue being generated.

Dwyer Astaphan speaking on the issue on Tuesday during his radio talk show The Operating Room:

“Even if the pier were ready today where is the traffic to make the pier earn money to pay SCASPA? Part and parcel of the agreement between SCASPA and and the local funders was for SCASPA to start paying the Port $1.2 million monthly on the arrangement, starting in September.

“So September, October, November, December, that’s $4.8 million that should have been paid before. The premise of that particular element was the expectation that the cruise pier would be operational. The problem with that remise is that building another cruise pier will not mean additional cruise ships will come. We did better last year and 2017 because St. Thomas and St. marten were down from the hurricanes- that is correcting itself and they are regaining their business, their market share.

“…So you may have a new pier but it may take a year or two or God forbid even more to get up to the figures that would allow SCASPA to generate sufficient funds to properly service the debt incurred on this project. In the meantime, projected for this year is a lower number [of cruise calls] than last year, and it is from the revenue from that lower number that you now have to service not only the old pier but the new pier with its additional costs if those costs happen to fall on the shoulders of SCASPA. So where will that money come from?

“These are things that are important in the public sphere that need to be discussed soberly, fairly and objectively. And people in positions of decision-making have to account.”

Minister with responsibility for SCASPA Ian Patches Liburd had indicated that upon final inspection after the pier had been handed over in November it was realized that it was too shallow and further dredging had to be done in order for the structure to be certified for use by the cruise lines. He said that work was to have commenced December 2nd, but Freedom FM understands the work has yet to start, despite ships having been scheduled to dock at that pier in early December.

At an official Contract Signing Ceremony in November 2017 Minister Liburd said the construction of the pier was expected to be completed within 18 months in time for the 2019 cruise season.

The project was funded by local entities, namely the St. Kitts-Nevis-Anguilla National Bank which put in US $34 million, the St. Kitts and Nevis Social Security Board with US $7 million, US $5 million from the SIDF, and US $2 million from TDC, a total amounting to US 48 million.