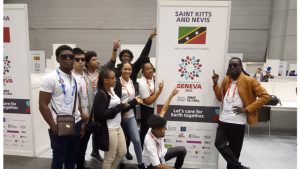 The St Kitts & Nevis Robotics Association (SKNRA) has turned its focus to future editions of the First Global Challenge robotics competition after the team gave some credible performances.

Team St Kitts and Nevis held their own at the 2022 competition in Geneva, Switzerland and picked up a vital win against teams that such as tech powerhouses South Korea and Estonia.

The team, which is made up of Malyka Howell, Patrina Perreira, Lakshya Sharma, Yakira Elliott, Brandon Powell, Michael Shaw, Tau Omowale, and Anthony Li, finished outside the competition’s top 15 per cent and did not advance to the playoffs.

Despite that disappointment, SKNRA said in a Facebook post that their performances are “a testament that St Kitts and Nevis has the potential to be greater, to be a leading country in the Caribbean in the area of science and research.”

“We have students researching drones, humanoid, AI, networking, gaming, taking research topics from the United Nations sustainable goals. The youths and this organisation have proven that they are ready to be placed on the road of opportunity. Since 2017, we have been proving the impossible.”

The association has called on the government and private sector to increase investments in science, technology, engineering, arts, and mathematics (STEAM).