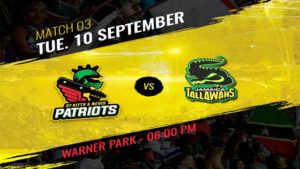 CPL fever has descended on St. Kitts as the St. Kitts and Nevis Patriots’ play their first home game of the 2019 season at Warner Park Stadium Tuesday evening.

The season got off to a rocky start for the Patriots who dropped their first two matches. Trinbago Knight Riders beat the Patriots by 11 runs in the first match of the Hero Caribbean Premier League at Queen’s Park Oval, Port of Spain on Wednesday, followed by an 8 wicket defeat at the hands of Guyana Amazon Warriors on Saturday.

The Patriots will play five games at home and their opening match will no doubt be a must see. The Patriots will face the Jamaica Tallawahs at 6pm, the team’s first encounter with their former captain Chris Gayle who ditched the Patriots after 2 seasons to return to the Tallawahs in 2019. All-rounder Carlos Brathwaite stepped into the captaincy role left vacant by Gayle.

That’s not the only change in the St Kitts & Nevis Patriots team for 2019, they are fielding new players and a new coach.

The second home game for the Patriots takes place 6pm Wednesday, September 11 against Barbados trident, followed by a match-up against Warriors at 8pm Saturday 14th, on Sunday 15th at 6pm against St. Lucia Zouks, and the final match on Tuesday 17th 6pm against Knight Riders.

The Hero CPL 2019 tournament will run until October 12th with the semifinals and finals slated for the Brian Lara Stadium in Trinidad.