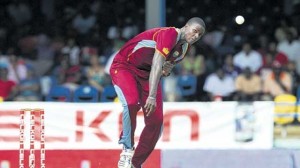 EAST LONDON, South Africa, CMC – West Indies captain Jason Holder has urged his failing side to muster all the pride they can and come back strongly in the two final One-Day Internationals of the five-match series.

The Caribbean side conceded the series on Wednesday when they went down by nine wickets in the third game at Buffalo Park here after a feeble performance with the bat.

Holder, in his first series as skipper, said the only thing left to motivate the Windies would be their sense of national pride.

“Obviously it’s a series loss and we need to salvage some pride but having said that we are still building towards the World Cup. We’ll be looking to get some combinations right and seeing if our batsmen can get some form going into the World Cup and finish off these two games well,” he told media following Wednesday’s contest.

“I think it’s down to pride. There is nothing more that can motivate you now more than pride. We’ve lost three games on the trot and pride tells you we’ve got to pick ourselves up. There’s nothing more to it, there’s no other motivation in my mind.

“We’ve got salvage some pride as proud West Indians and play that brand of cricket that we’re used to.”

West Indies never showed up on Wednesday. They were dismissed for a paltry 122 off 33.4 overs, after winning the toss and opting to bat first.

Only vice-captain Marlon Samuels with 26 managed to pass 20 as West Indies slumped to 96 for nine at one stage.

In reply, they got Rilee Roussouw cheaply for seven but opener Hashim Amla, with 61 not out, and Faf du Plessis, with 51, stroked half-centuries to see the hosts home comfortably.

Holder said he was concerned the Windies were not learning fast enough from their mistakes.

“I am worried about the way we are going about our cricket. I think we can be a lot more respectable and put up our hands sometimes when we make errors,” he pointed out.

“I think the quicker we learn from our errors the better we would make improvements. At the moment, it just seems as we are making the same errors over and over again. It’s just about correcting those errors and being man enough to say I’ve committed this error and just moving on from it.”

The 23-year-old said at some point the current scenario would require having a frank discussion involving him as the leader of the unit, and said he would speak when that time came.

“I believe in honesty. One thing I pride myself in being is honest so I’ll be very honest with the fellas,” Holder noted.

“I’m one to just speak my mind at times and when it is appropriate to speak my mind, I will speak my mind. It’s just about getting the message across and having players understand where I am coming from and I think once that is established, things become a lot easier.”