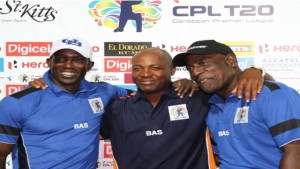 Former captain of the West Indies cricket team and batting legend Sir Vivian Richards said he will support a move by another former captain and batting great, Brian Lara, if he decides to contest the 2017 WICB presidential election.

In March of this year the Trinidadian, during an interview with Starbroek News, said he is becoming increasingly concerned at the deficiencies in the management of the sport in the Caribbean, and he would have no hesitation in accepting a nomination and contesting the top post as president of the WICB.

Sir Viv, speaking on OBSERVER Radio’s Good Morning Jojo Sports Show on Friday, said Lara, once he “brings the right stuff”, will get the necessary support.

“Well, if Brian brings the right stuff, then certainly. He is a past player … who understands the game well enough and maybe he would have had his problems in the past with board and all the various things, which we all do at some point, but at the end of the day, why not?” he asked.

“If he feels he has the right stuff to bring on board, supporting wouldn’t be a problem.”

“Well, I have heard maybe that some folks are suggesting that he is too young, but it is better to start at that particular age. And if he gets lucky enough and we are successful, you have a long successful period of your captain being in place rather than the chopping and changing on a regular basis,” he said.