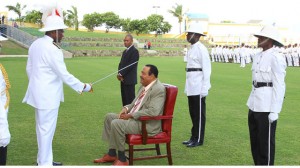 ST JOHN’S, Antigua – Four knighthoods topped the list of 21 national awards conferred on residents during the Ceremonial Parade to mark the 33rd anniversary of Independence yesterday, with the most outstanding being that of former prime minister Lester Bird, who received Antigua & Barbuda’s highest honour.

Bird was named Knight of the Most Exalted Order of National Hero (KNH) for his contribution to national development as an outstanding sportsman, lawyer and parliamentarian for 38 years.

The two-term prime minister who joined the ranks of his father, Sir Vere Cornwall Bird Sr, and cricket legend, Sir Vivian Richards, the only other living national hero, said he was “proud and humbled” with his recent accolade.

Veteran surgeon Dr Cuthwin Leonard Lake was named Knight Commander of the Most Distinguished Order of the Nation (KCN) for contributions to national development in the field of medicine.

Proprietor of Harney Motors Ltd, Ewart Harney was also recognised for his contribution to entrepreneurship and community service when he was named Knight Commander of the Most Distinguished Order of the Nation, KCN.

Also receiving high honours yesterday was JM Eusalyn Lewis who was named Dame Commander of the Most Distinguished Order of the Nation (DCN) for her contributions to public service, education the church and community development.

Meanwhile, four nationals were conferred with the honour of Grand Cross of the Most Illustrious Order of Merit (GCM) yesterday. They were: Calvin Greenaway for his contribution to the development of sports; Ilma James for education; Lebrecht Hesse for law and public service; and Catherleen Robinson for public health nursing and public service.

Late businessman Ian Shoul was also awarded GCM when he was recognised posthumously for his contributions to national development in the field of commerce, community development and labour relations.

Dr R Bekal was named Grand Officer of the Most Illustrious Order of Merit (GOM) for contributions in the field of medicine, and educator Patrick George Lake was also honoured with a GOM.

Completing the list was Stedroy Franklin Braithwaite who named Grand Officer Most Precious Order of Princely Heritage (GOH) for distinguished contribution to sailing and community development.

The Ceremonial Parade, which included an inspection of the guards by Governor General Sir Rodney Williams and precision drills by military and other uniformed bodies, was followed by a reception for government officials, diplomats, awardees, other dignitaries and special guests.