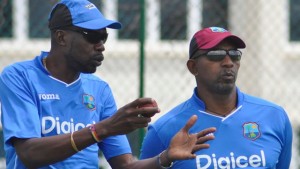 Former fast bowler and bowling consultant for the West Indies cricket team, Sir Curtly Ambrose, believes that former teammate and new coach of the regional squad, Phil Simmons, is presently the best man for the job.

“I know for sure, Simmons is a team man; I’ve never worked with him as (he) being a coach, but I know as a team person he will bring something different.

“Working with him for the last four days — because we had a management meeting and he laid out his plans — I’ve been very impressed with what he has to offer and I can see that there will be some changes going forward. I believe good things are going to happen because Simmons is a serious man,” he said.

The Antiguan, who racked up 405 wickets in 98 Tests and 225 victims in 176 One Day Internationals, added that the overall aim is to move West Indies cricket up the ICC rankings in all formats of the game. But, he said, this will not come overnight.

“Even before I joined the West Indies team, it used to frustrate me as well because I was part of the best team in the world so I know what it means to Caribbean people. Now that I am a part of it, I am going to do the best I can to try and get the cricket forward,” Sir Curtly said.

“When I joined the team first, people talked about getting back to number one but I am a realist. We are so far away from number one, my job is to try and get us into the top four first because you can’t leave from number eight to number one just like that; it’s not that easy … we can’t think about number one as yet, we have to be real about this thing,” he added.

Speaking of his role as bowling consultant, Sir Curtly said the players have responded well to his methods.

“I have to be patient because it is not going to happen overnight. I have no problem working with the guys, they give me the fullest of respect, I do the same to them and sometimes I get a little aggressive with them when things aren’t going well, but they understand that it is for their benefit,” the former player said.

West Indies take on England in the opening of a three-Test series here at the Sir Vivian Richards Cricket Ground (SVRCG) starting Monday. Government has declared Monday a half-holiday in support of the match.