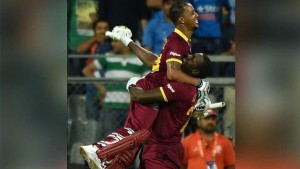 West Indies Lendl Simmons celebrates with a teammate after winning the World T20 cricket tournament semi-final match against India at The Wankhede Cricket Stadium in Mumbai on March 31, 2016.

The St Kitts & Nevis Patriots have announced their fixtures for the forthcoming 2016 HERO Caribbean Premier League (CPL) campaign and will open their season with a clash against twice runners-up Guyana Amazon Warriors on Thursday, 30 June.

The Patriots, who have been bolstered by West Indies favourites Lendl Simmons and world number-one ranked bowler Samuel Badree, as well as South Africa’s World T20 captain Faf du Plessis, will take on four opponents over six days in a combination of day and night time games that is sure to attract a large following to the 8,000 capacity Warner Park.

Welcoming the announcement, Hon. Shawn K Richards, Deputy Prime Minister and Minister of Education, Youth & Sports said: “The Ministry of Youth, Sports and Culture extends congratulations to CPL CEO Damien O’Donohoe and the CPL team for the outstanding 2014-15 CPL tournament which was successfully hosted on the warm and friendly shores of the Federation of St Kitts-Nevis.

“We remain committed to advocating and establishing what we plan to be a lasting legacy of cricket engrained in the socio-economic development and culture of our federation, as we welcome the anticipations of excitement of the Hero 2016 CPL tournament.

“While we embrace the obvious gains of tourism, marketing and investment promotion of our Federation, through these internationally televised games and the massive influx of cricket loyalists that are intrinsic to the CPL tournament, our vision of a mature cricket industry impacting the holistic development of our twin-island nation, with particular resource to youth social and entrepreneurial development, retains the greatest priority.

“We embrace the St Kitts-Nevis Patriots as cricket ambassadors to the federation and seek to greater facilitate their ascension to the seat of CPL Tournament championship in this 2016 series. Our enthusiastic Patriots fans, ongoing facility upgrades of the Warner Park Cricket Stadium and nearby practice rounds will continue to enable a supportive, smooth and entertaining fourth edition CPL T20 party in 2016.

“I trust that nationals and visitors alike remain engaged, entertained and even inspired by the activities of the 2016 CPL in St Kitts-Nevis, and to enjoy our St Kitts-Nevis Patriots’ domination of the tournament’s matches in a peaceful and festive environment.”

Richie Berridge, Chief Operating Officer of the St Kitts & Nevis Patriots, added: “We are delighted to confirm our fixture schedule for the forthcoming CPL campaign. By announcing our schedule today, it will enable all of our key stakeholders, particularly our squad and management, loyal supporters and partners, to plan accordingly.

“With our most competitive roster now assembled, we are also looking forward to welcoming some of the best West Indies and international talent to St Kitts & Nevis in the opening week of CPL 2016. On behalf of the Patriots I would finally like to thank our government partners for their support over the last few months. Their commitment and appreciation of the significant role that CPL contributes economically, which enables us to market the game and strive for excellence.”

The remaining fixtures will be confirmed over the coming weeks and tickets will then go on sale from www.cplt20.com