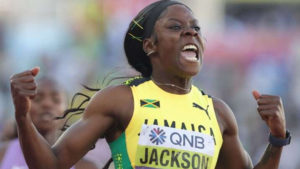 EUGENE, Oregon — Shericka Jackson produced another masterclass of sprinting after she delivered a stunning championship and national record of 21.45 seconds (0.6m/s) to win the women’s 200m on Thursday’s seventh day of the World Athletics Championships at Hayward Field in Eugene, Oregon, to become the second-fastest woman of all time over the half-lap event.

It was Jackson’s second personal best time in these championships after her 10.73 seconds run for silver in the 100m four days earlier as Jamaica took five of the six women’s sprint medals on offer. Shelly-Ann Fraser-Pryce took the silver with a season’s best 21.81 seconds and Great Britain’s Dina Asher-Smith, the previous champion, was third with 22.02 seconds.

The third Jamaican, Elaine Thompson-Herah, was seventh with 22.39 seconds.

Jackson’s time surpassed her own previous personal best of 21.55 seconds set a month ago at the Jamaican championships and broke Thompson-Herah’s national record of 21.53 seconds set last year at the Tokyo Olympics, but trails Florence Griffith-Joyner’s world record 21.34 seconds set in 1988.

It also beat the previous championship record of 21.63 in 2015 by Dafne Schippers of the Netherlands set in 2015 in Beijing, China.

Jackson, like she did in Kingston a month ago, had promised something special and delivered in style as she streaked away from the quality field to win by a commanding margin.

The two medals, Jackson’s first global gold medal and Fraser-Pryce’s silver, pushed Jamaica’s tally to six — two gold, three silver, and one bronze and to third in the tables behind leaders the United States (22) and Ethiopia (eight).

Earlier Thursday, many-time national women’s 800m champion and Olympic Games finalist Natoya Goule-Toppin says she is in better shape than last year and thinks she might surprise herself.

Goule-Toppin won her first-round race in 2:00.06 minutes and advanced to today’s semi-finals along with Adelle Tracey who ran a personal best of 1:59.20.

National champion Chrissann Gordon-Powell failed to make progress in her first major championships since she started running the two-lap race this year as she placed fifth in her first-round heat in 2:01.91 seconds.

Goule-Toppin made easy work of her first round, and despite saying she had some “race rust” after not running since the Jamaican trials last month, insisted that, despite losing for the first time at the trials, she is in better shape this year than last year.

“If you all go back and look at my stats you will see that Natoya Goule is in better shape than she was last year.” And when asked what the fans could expect from her, she said, “Lets wait and see as I feel like I am going to surprise myself as well.”

Tracey, who exited the 1500m at the semi-finals stages earlier, said: “I am super happy, just wanted to come here and really leave it all out there.

“Obviously there is a little bit of frustration from the 1500m, obviously I was pleased with the progress that I made in my first year that I have done the 1500m, but this is more familiar territory for me and I am excited that the strength from the 1500m is showing in the 800m.”

Jordan Scott failed to make progress in the men’s triple jump after registering 16.42m (-0.3m/s) on his final effort in the preliminaries after two foul jumps.

Meanwhile, the teams to run in the preliminary rounds of the 4x100m relays today was released on Thursday and will see Olympic Games gold medallist Briana Williams and World Championships 100m finalist Oblique Seville both take part.

Williams, Natalliah White, 100m semi-finalist Kemba Nelson, and Ramona Burchell will run the women’s preliminaries that will start at 6:40 pm.

They will face Canada, Ireland, Germany, Great Britain, Japan, Poland, and China, with the first three in each of the two semi-finals as well as the next best two teams automatically advancing to the final along.

It is expected that 100m medalists Shelly-Ann Fraser-Pryce, Shericka Jackson, and Elaine Thompson-Herah will join the team for the final set for Saturday.

The men’s team will include Seville, who was fourth in the 100m on Saturday, semi-finalist Ackeem Blake, Kemar Bailey-Cole, and Jelani Walker, and Seville will run in the men’s race set to start at 5:05 pm local time.

The men are in the second of two semi-finals and will face Denmark, South Africa, Brazil, Italy, France, Spain, and Canada.

Each team is allowed four changes if they qualify for the final.