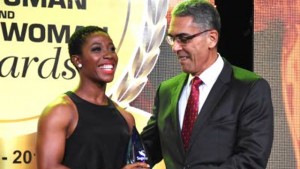 After consistently dominating the track since 2008, there is no award that Shelly-Ann Fraser-Pryce could win that would surprise her. She seems to have won them all.

But the diminutive sprinter, the best of her era and arguably the greatest of all time, was totally surprised after being given the Sagicor Iconic Award at the RJR National Sportsman and Sportswoman Awards ceremony at the Jamaica Pegasus Hotel on Friday night.

“I didn’t know I was getting an Iconic Award. I saw the image on the screen and I thought it was just for the Sportswoman of the Year nominees going over again,” explained Fraser-Pryce.

“Then I heard. I was like ‘OK’. It was really wonderful to have received the award; who would have dreamt that I would be here? I am overwhelmed with emotion. I am not a crier, but overwhelmed to get this award,” said Fraser-Pryce.

“Winning an award is a signal that you did something right and I am excited about that, honoured, blessed and grateful,” she added.
The Sagicor Iconic award is presented to a person or entity, who has, in the opinion of the RJR Foundation Board, performed consistently at the global level for a sustained period of time.

The recipient may come from any area of sport. The award carries with it a cash component of $200,000, which is presented on behalf of the recipient to a charity of his or her choice.

The award is not intended to be given posthumously as it aims to inspire individuals to greater levels of performance and successes.

Usain Bolt was the first recipient in 2011 and was followed by his coach Glen Mills in 2012. Netball administrator Molly Rhone was given the iconic award in 2013 and the legendary sprinter Donald Quarrie received it in 2014.