Shanique Myrie found not guilty of beating husband in US 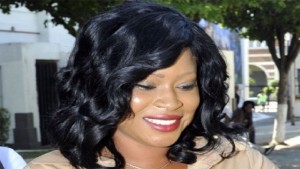 MARYLAND, United States, Friday May 9, 2016 –Shanique Myrie has again come out of the winning side of a court battle. The Jamaican, who successfully sued the Barbados government five years ago, has been acquitted in the United States of an assault charge. The charge had stemmed from allegations made by Myrie’s estranged husband, Troy Pusey, that she had chased him with a knife, and kicked and punched him.

The matter concluded in a Harford, Maryland court last Thursday with a not guilty verdict. “He went on the stand and told a bag of lies, contradicting himself, and the judge saw him for the liar that he is,” Myrie told the Jamaica Star newspaper. Myrie and Pusey, who was born in Jamaica but has US citizenship, got married three years ago after meeting on Facebook.

Pusey has accused Myrie of using him to get a green card and becoming abusive after she attained it, but Myrie has insisted that her husband is emotionally unstable and is on a mission to ruin her reputation. The Jamaican woman first came to public attention in 2011 when she claimed that on March 14 of that year, when she arrived at the Grantley Adams International Airport in Barbados, she was finger raped by a female Immigration officer, badly treated, and then denied entry to the island.
She took the matter to the Caribbean Court of Justice which ruled in her favour and she received BDS$75,000 (US$37,500) in non-pecuniary damages and BDS$2,240 (US$1,120) in pecuniary damages